Official Opening of the Visitor Centre by HRH The Princess Royal

On Monday 1st June 2015, our brand new permanent Visitor Centre was opened by HRH Princess Anne, the Princess Royal. She was joined on the day by her husband Vice Admiral Sir Tim Laurence.

Why did we need a new Visitor Centre?
The Clifton Suspension Bridge Trust has charitable objectives to provide education and information for visitors. An estimated 500,000 people per year visit the bridge and for the past 20 years visitor services have been provided in rented, temporary accommodation with limited space for interpretation or space for educational activities.

The new Visitor Centre is therefore of great importance to the Trust, who are proud to have been able to provide it. The land has been made available by rebuilding and rationalising the Trust’s bridge maintenance facility, with the Bridge Master’s offices built above the maintenance workshop and stores. The Bristol architects Alec French Architects were appointed to design the new operational accommodation and the Visitor Centre, and planning permission was secured in 2013. Local builders Rydon Construction were contracted for the development, which was completed on programme in 2014. Bristol designers CodSteaks then designed and installed the exhibition displays.

The Trust is greatly indebted to the Heritage Lottery Fund for their contribution of approximately 50% of the cost of the Visitor Centre construction and the new exhibition. 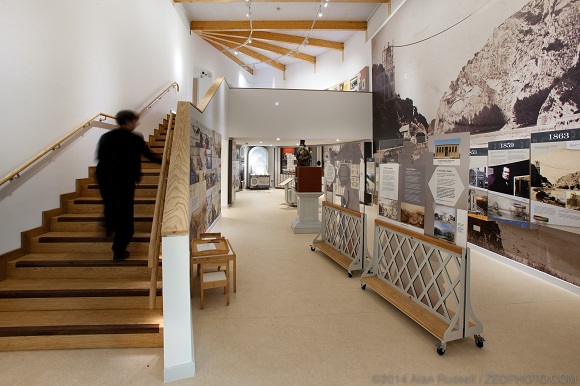 The Visitor Centre was completed to celebrate the 150th anniversary of the Bridge.

What happened on the day?
The event took weeks to plan and a team of volunteers from the Visitor Centre worked very hard behind the scenes to make sure that everything ran smoothly on the day. The night before, volunteers worked with Gabor, Ildeco and Jason (the team from Skweeky Kleen) and Mike Anstey from Rydon Construction to get the new building sparkling clean and set up all of the furniture ready for the big event! Maintenance Team Nigel Neville and Martin Hathway even gave the old Attendant’s Mess Room a lick of paint!

At 7.30am, final preparations began. The building was searched by a team of sniffer dogs and police to make sure that nothing had been tampered with. A marquee was set up in the maintenance yard to provide a space for waiting event guests, stewards arrived to set up viewing areas for event spectators and caterers Gert Lush arrived with platters of tempting buffet food and finger snacks!

Despite the rain, everyone was in high spirits. Bunting was put up and the Future Brunels (students from Merchant’s Academy) arrived, ready to begin a Newspaper Bridge Building Challenge with Community Learning and Volunteer Officer Helen Jeffrey – which Princess Anne would visit later in the day. 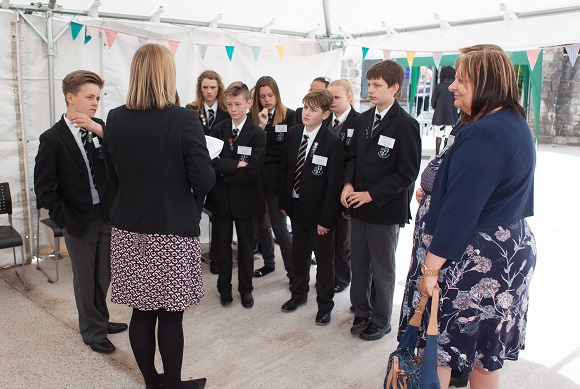 The Future Brunels arrive for the event briefing.

At 11.45, guests began to arrive. 100 people were invited to take part in the celebration – each one having been directly involved with the project to create the new Visitor Centre! Desrine Beckford and Anne Marie Cross from the Bridge’s Admin Team along with Volunteer Bob Bruton checked everyone in and issued them with name badges. 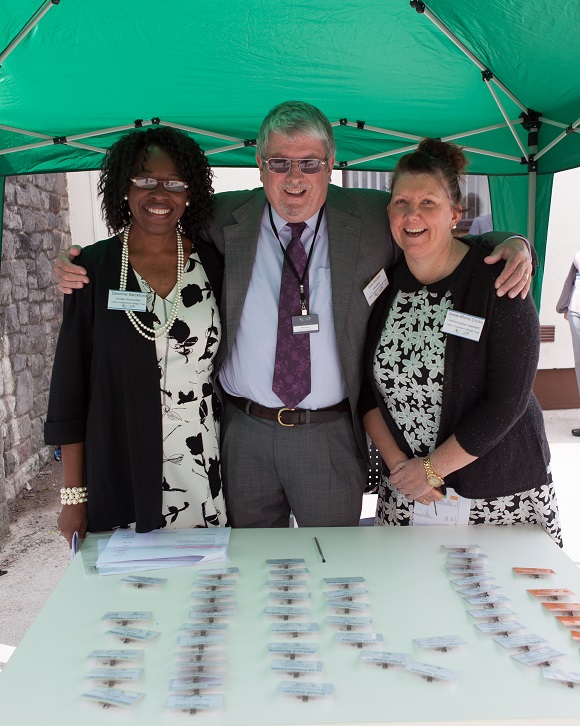 Our meet and greet team! 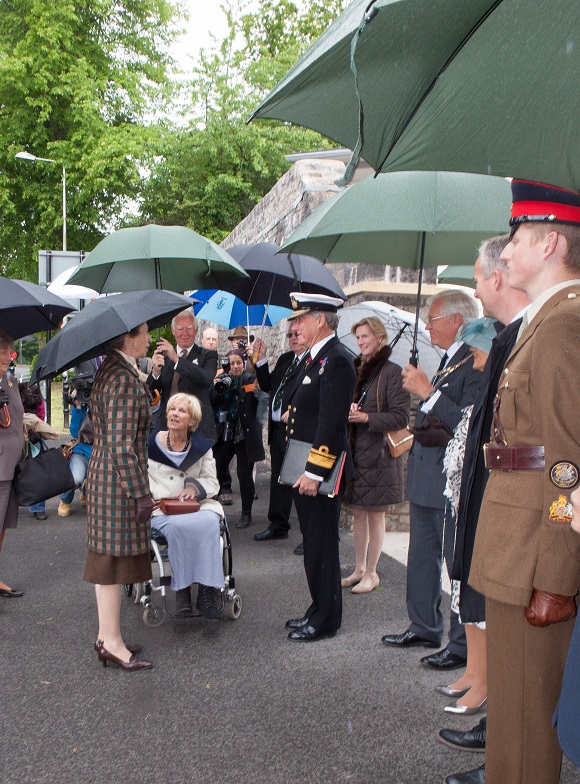 Finally, The Princess Royal was introduced to Mr Chris Booy OBE, Chairman, Clifton Suspension Bridge Trust who escorted her inside the Visitor Centre for a private tour of the new exhibition. Trustee Francis Greenacre and Visitor Services Manager Laura Hilton were on hand to share some of the fascinating stories from the history of the bridge. Princess Anne was most interested in the tolls charged for different types of vehicles and livestock when the bridge opened in 1864 and enjoyed the splendid view of the bridge from the first-floor picture window. Sir Tim Laurence was surprised to learn that the bridge is sprinkled with urea in the winter to melt away snow and ice (salt would corrode the ironwork). 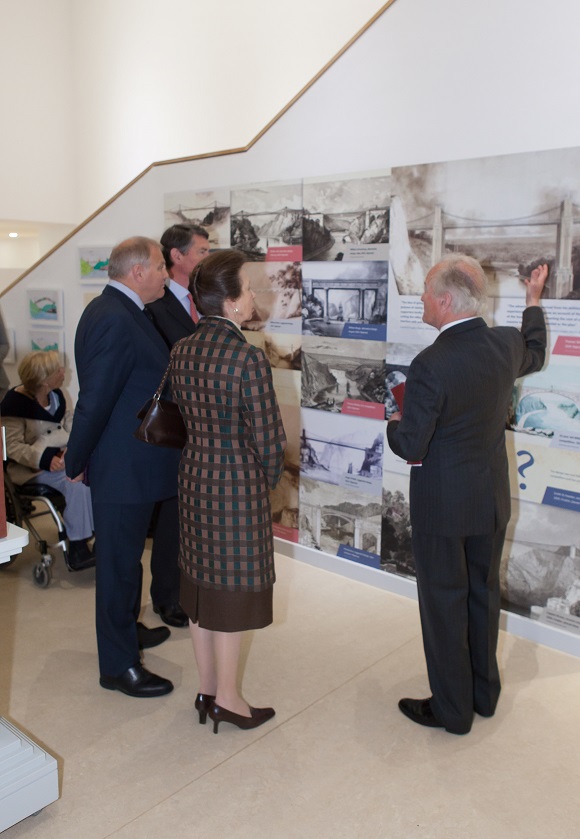 Francis Greenacre talks about Thomas Telford’s design for a bridge across the Gorge. 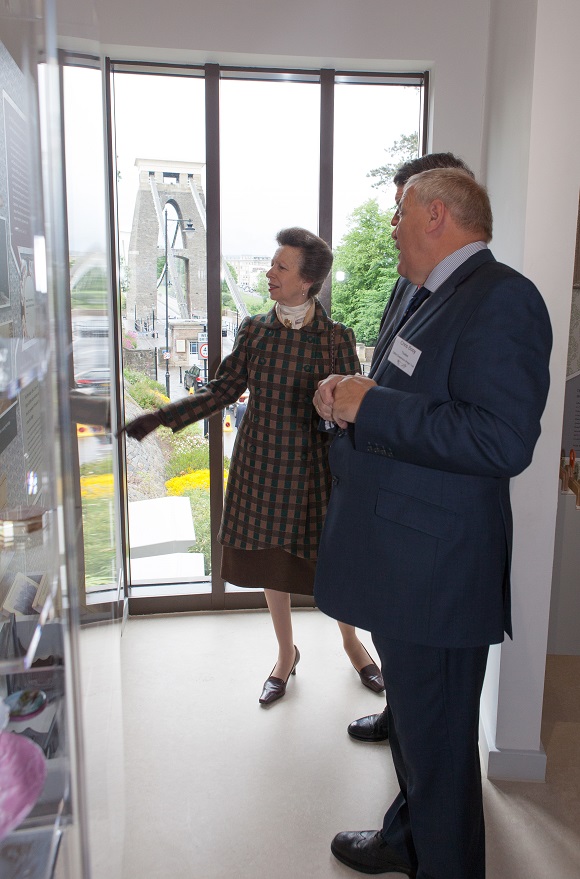 HRH Princess Anne reads some of the stories and reminiscences about the Bridge.

After the tour of the exhibition, Her Royal Highness met Bridge Trustees Mr Alf Perry, Mr Dayrell McArthur and Mr John Benson as well as Mr David Mellor, an architect from Alec French Architects who designed the new building and Mr Paul Barber of Rydon Construction who lead the building project. Her Royal Highness remarked that the building seemed very spacious and said that she thought the ceiling beams were a good feature.

Inside the Education Workshop, the Future Brunels had been hard at work and were ready to test their bridge designs. Princess Anne was just in time to help with this and quizzed the students about their designs. She was particularly pleased to see that a number of girls had engaged with the programme and spoke of the importance of encouraging young women to take up careers in engineering. Princess Anne encouraged the students to test one of the bridges they had built by sitting on it (it worked) and helped to place a weight of 19KG on another. She commented that a clever design and the inclusion of anchorages had made it a very sturdy design. 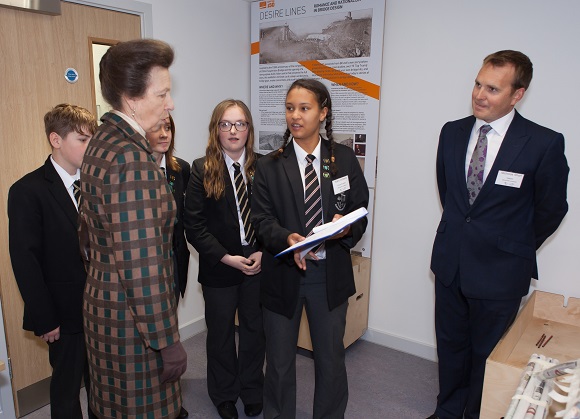 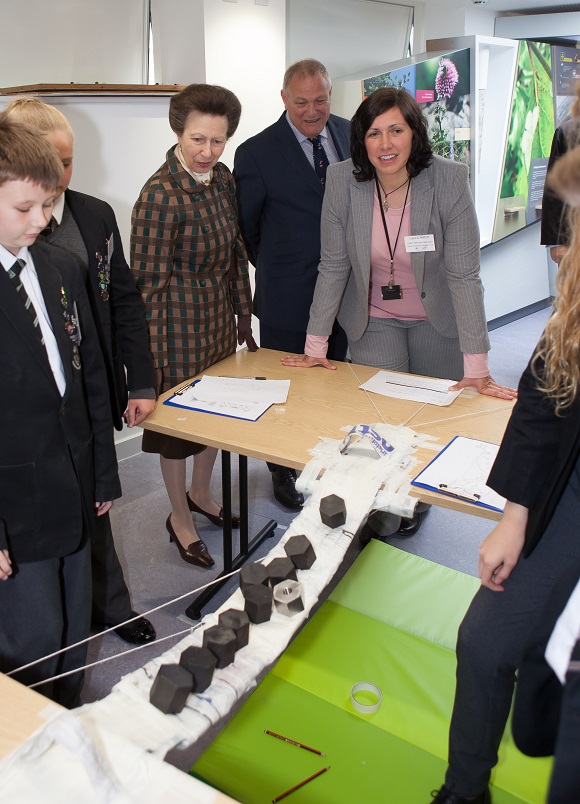 A bridge design is tested.

Her Royal Highness then left the building and went to meet other people involved in the project inside the marquee. She and her husband met a group of Trustees introduced by Professor Colin Taylor, a group of staff lead by Mr Tim Baines, a group of volunteers lead by Mr Robin Haward and the Design Team (consisting of staff from Rydon Construction, Alec French Architects, CodSteaks Exhibition Design and consultants from Heritage & Community) lead by Mr Nigel Dyke. Volunteer Ernie Hopper said that meeting Princess Anne had been one of the top five experience of his life, topped only by climbing the Sydney Harbour Bridge! Others said that meeting the Princess Royal had been a wonderful experience because she seemed genuinely interested in what they had to say and had made time to talk to everyone involved. 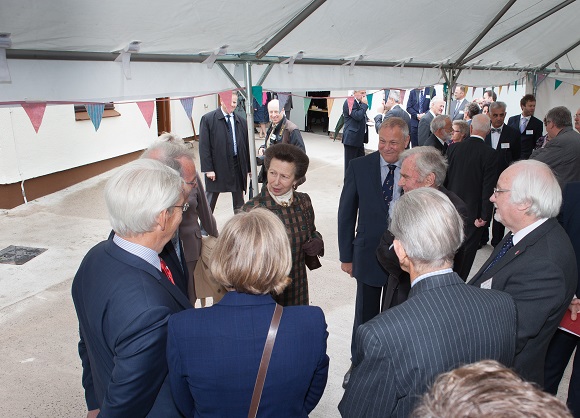 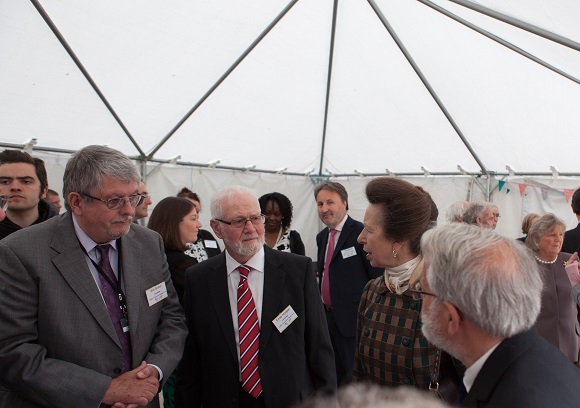 After a short lunch, the Princess Royal toured the bridge with Mr David Walker, Trustee of Clifton Suspension Bridge and Mr David Anderson, Bridge Master. She met Bridge Attendants Paul Wilkes, Don Midlane, Nick Wiltshire and Kevin Bird who told her about their role: looking after the bridge, traffic and pedestrians 24 hours a day, 7 days a week. At the Leigh Woods Abutment, the party also met Maintenance Team Nigel Neville and Martin Hathway who spoke about the work they are currently engaged in: removing, testing and reinstalling bridge hangers to ensure that they can safely carry the loads placed upon them. Her Royal Highness heard about the restoration project currently underway on the Clifton Tower and spent some time inspecting the bridge deck and chains with Mr David Walker, who was able to answer a number of complicated questions about bridge engineering! 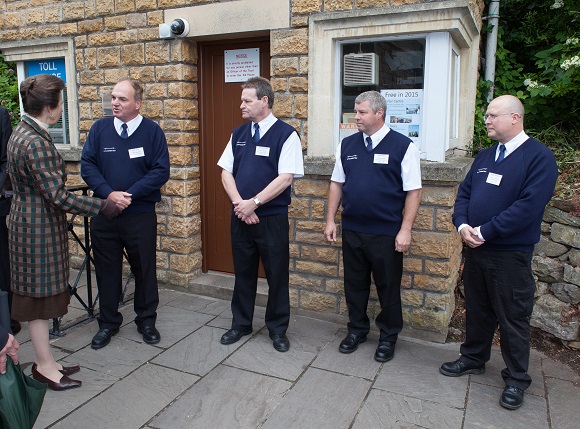 The Princess Royal speaks to a team of Bridge Attendants. 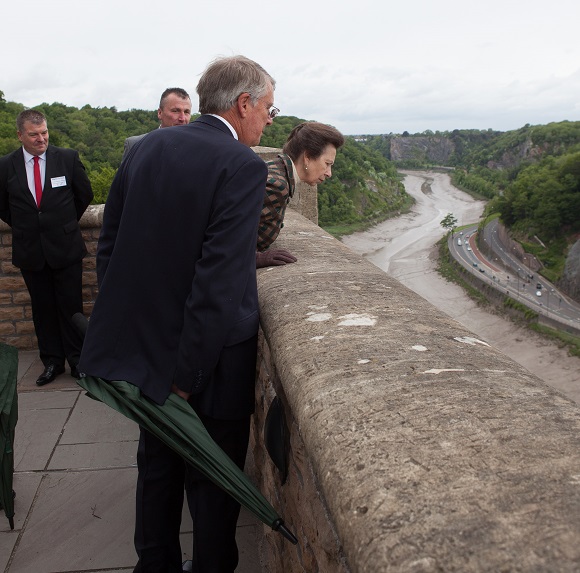 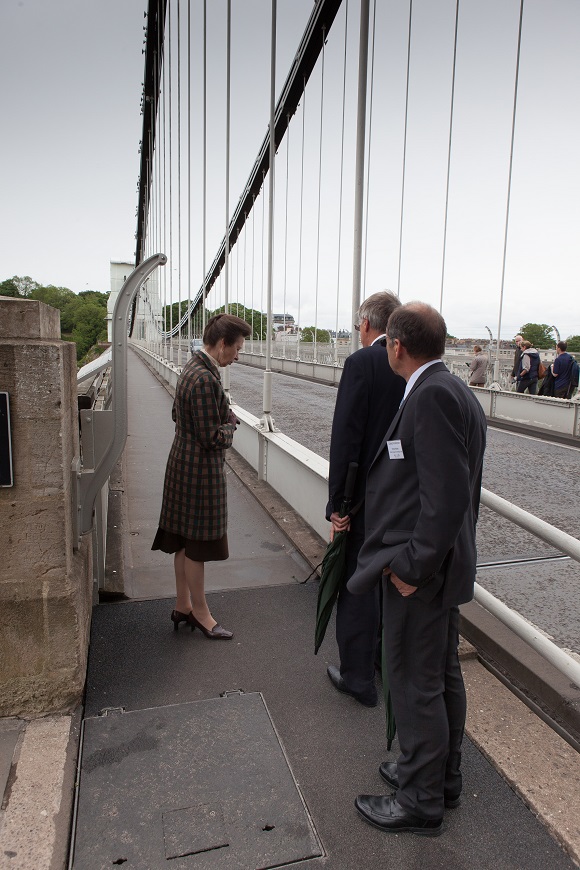 Watching the movement of the bridge deck.

Finally, the party returned to the Visitor Centre where all the guests had assembled. Mr Chris Booy gave a short speech thanking everyone involved in the development of the Visitor Centre, especially the Heritage Lottery Fund whose help had made the project possible. Princess Anne said “Sometimes iconic is an overused word but in relation to this bridge, it is not. My congratulations to everyone involved in this project and to the engineers of the future who are coming up with some really interesting ideas.” Her Royal Highness unveiled a plaque (which will be installed in the Visitor Centre foyer) and signed the Visitor book. 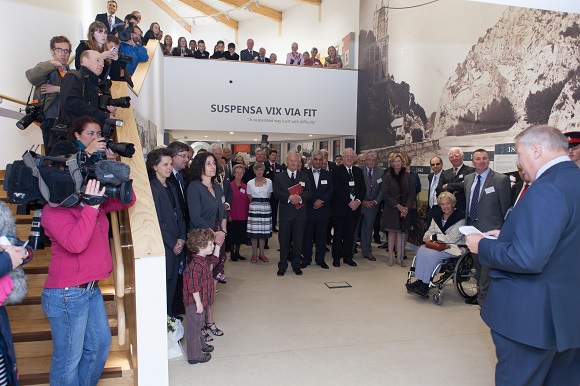 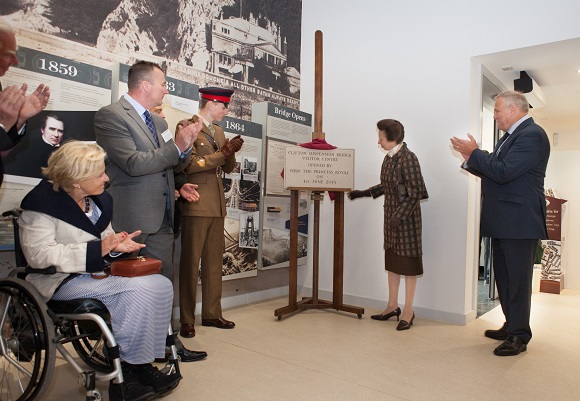 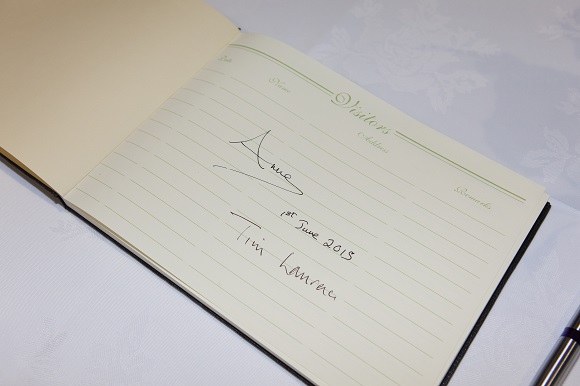 The Visitor’s Book is signed.

A posy was created by Lisa Elliot of Lisa Elliot Floral Design which contained garden varieties of Bristol Onion (Allium sphaerocephalon) and Spiked Speedwell (Veronica spicata), two plants which grow in the Avon Gorge, and Area of Outstanding Natural Beauty. The posy was presented by Jack Kewley, aged 3 1/2, the most frequest visitor to the new Centre. Jack visits every day and is an expert on bridge building! 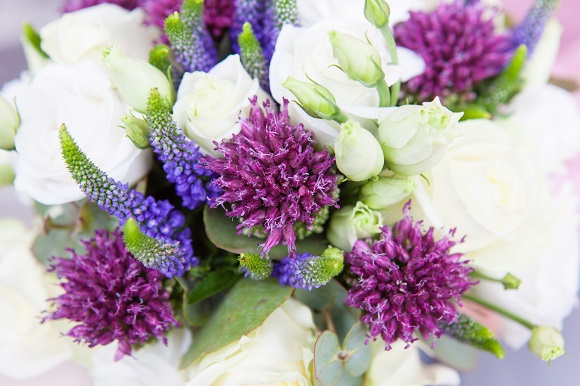 A beautiful posy was prepared by Lisa Elliot containing flowers native to the Gorge. 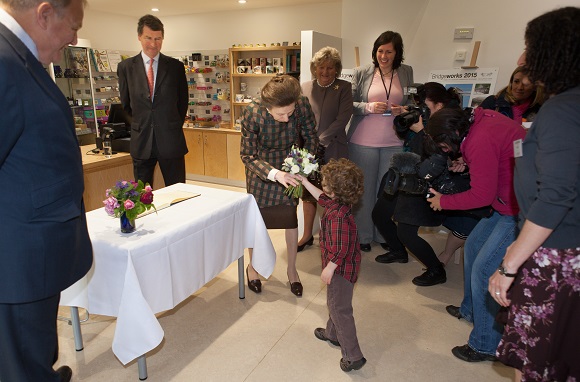 With the event over, Mr Chris Booy and Mr Francis Greenacre escorted Her Royal Highness to the main door and bid her farewell. She was seen to her car by the Lord-Lieutenant and departed, driving across the bridge. All that was left to do was to speak to the press about the day’s events and open the Visitor Centre to the public! 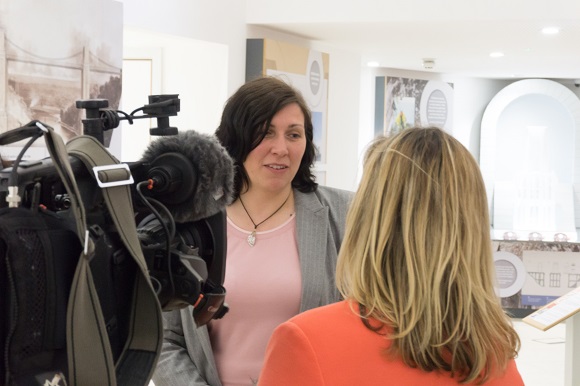 We’d like to thank Alan Russell of Zed Photography for capturing all of these wonderful images of our event day.