Bridge Master is a fascinating and varied job. It covers not only the maintenance of this amazing structure but also the running of the business. I am responsible for the maintenance and inspections we carry out on the bridge to ensure it remains an iconic symbol of Bristol for many years to come.

Since 1st January 1953, the Clifton Suspension Bridge has been managed and maintained by the Clifton Suspension Bridge Trust (CSBT), a not-for-profit charity. The Trust does not receive any local or national government funding but must raise almost £1,500,000 each year to preserve the bridge in perpetuity to the highest possible standards. An Act of Parliament ensures that toll money collected from bridge crossings is used specifically to achieve this aim. A small team of staff work alongside specialist contractors to help us achieve this. 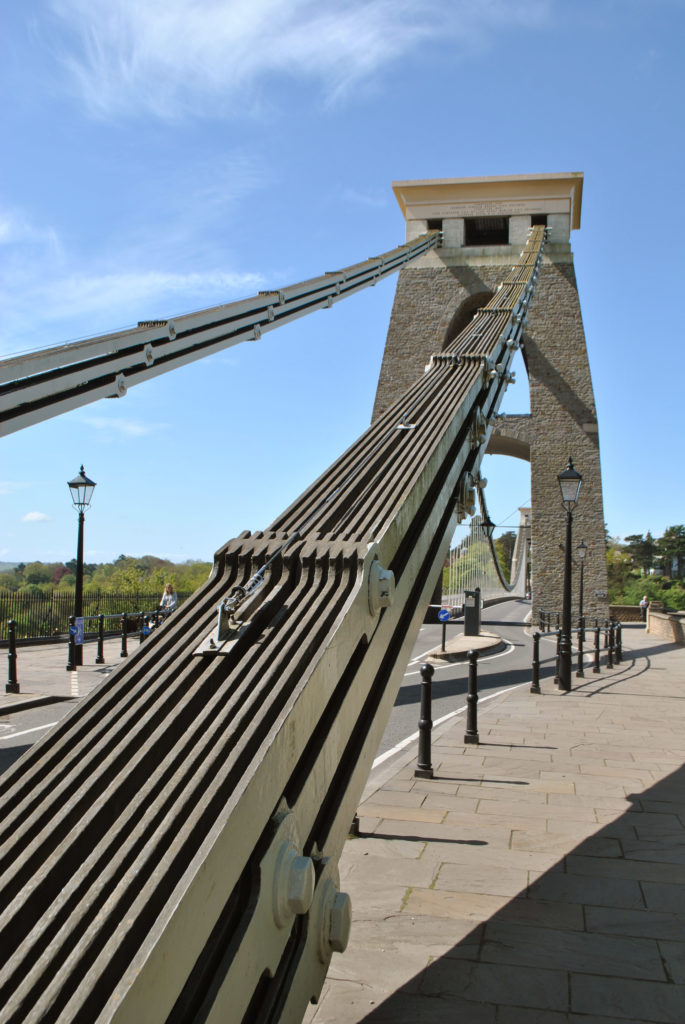 Inspections used to be carried out by men ‘walking the chains’ without any harnesses or ropes. Nowadays our consultants, COWI, use more suitable access arrangements when inspecting the chains. As the bridge has a 4 ton weight limit, and due to the narrow width of the road, closure of the bridge is required during these inspections. As the bridge is a visitor attraction we still maintain footway access even when the carriageway is closed.

Each chain passes over rounded saddles at the top of each tower. These saddles sit on a series of 25 rollers with the intention of providing longitudinal movement of the chains. The rollers accommodate changes in loads on the suspended span and (principally) changes in temperature of the chains. Regular inspection and maintenance requirements are in place to reflect the critical role of the saddles – and they are cleaned and oiled regularly to ensure movement.

Once the chains have passed over the tower saddles, they sweep down to the fixed land saddles at ground level and then from these into the underground anchorages. In 1925 the anchorages on the Leigh Woods side were strengthened as a precautionary measure. This was done by boring into the rock above, below and to either side of the chains and fixing stays to them. The tunnel was then backfilled with 6m of concrete. The Clifton anchorages were similarly strengthened in 1939. Further analysis of the anchorages has shown that both systems are adequate for the bridge. 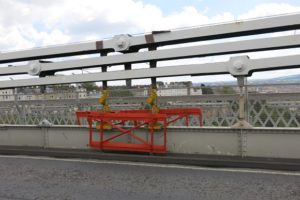 The deck is suspended from the chains by a series of hangers. A broken hanger was found by a member of the public on a Saturday afternoon in April 2009. Thankfully, the bridge can sustain the loss of one hanger with two 2.5T axles side by side on a single cross-girder. A temporary hanger was installed to restore support, which enabled the bridge to operate unhindered and bought the Trust and Flint and Neill time to investigate. The crack had occurred over a long time – took so long that fatigue failure surfaces had corroded. Since 2009, the hangers have undergone a series of refurbishments and are inspected regularly to ensure this never happens again. 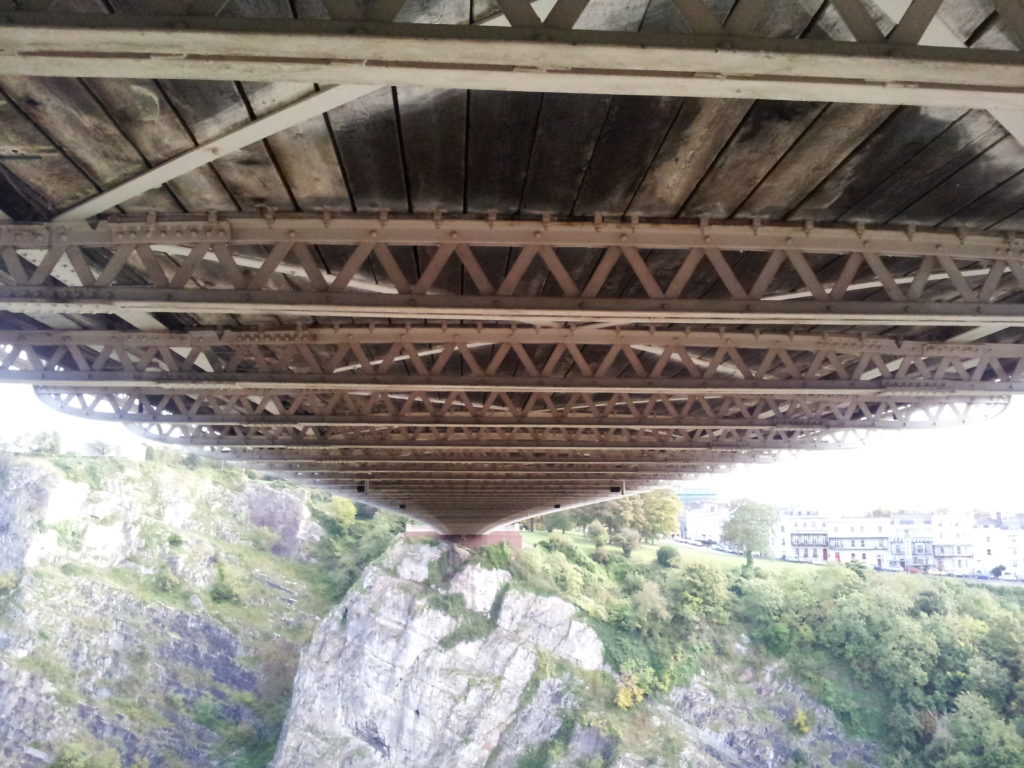 The bridge deck is supported from the hangers or suspension roads and consists of two wrought iron longitudinal girders which separate the road from the footways. Beneath the girders, bolted at right angles, are the lattice cross girders which provide the rigidity for the deck.

The wrought iron longitudinal girders were one of the significant design changes made by John Hawkshaw and William Henry Barlow who replaced Brunel’s proposed timber trussed deck structure. Iron lattice parapet girders contributed to the stiffness and strength and another change to the design were the wrought iron cross girders which stiffened the structure and supported the road deck. The road deck had two layers of douglas fir planking at right angles to each other.

The ironwork of the deck needs protection by regular painting. The painting of these areas is done via an underdeck gantry which is a permanent fixture under the deck. Wood Group recently completed the painting of the underdeck in 2017. To get the to top face of the girders the footway had to be lifted in sections, painted and replaced. This meant footway closures for up to six months.

Also a big find were the vaults in the Leigh Woods Abutment. Since discovery focus has been on establishing safe access to all vaults. This has included on-site confined space training and mock rescue by the Fire Brigade. Access to the lower vaults was only recently established after a few attempts at unblocking the access tunnels which had been partially backfilled with rubble using vacuum excavation. Another big job was to install scaffolding and clean and repair the external stonework on the abutments. This was a very arduous process and with the structure being a Grade I listed structure – great care was required. Similar work was carried out on the stonework on the towers with some replacement stone needed.

Shortly we will be painting the longitudinal girders. This involves writing contracts, going out to tender, appointing a contractor – then procedures, risk assessments, traffic management and working out how to fit it into the other work planned for the bridge. Not that easy! We are also planning to build some new Toll Houses to replace the existing 1950s buildings on the Clifton side with some more modern and user-friendly buildings for our bridge attendants who man the bridge 24 hours a day. Painting of the chains will be required in a number of years.