Caring for an old bridge

What have a bandage and a pile of x-rays got to do with the Bridge? As Archivist, things often get passed to me for safekeeping and adding to our collections. Recently a pile of x-rays and a bandage appeared – I was a bit confused as usually these things are used for repairing bodies not bridges. 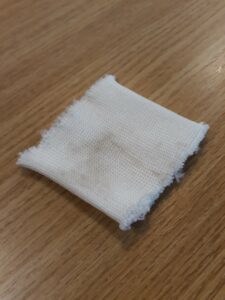 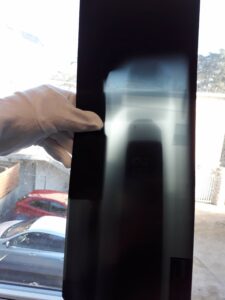 The bridge is old and certainly needs constant care and attention to keep it in tip top condition. It was opened in 1864 and the majority of the structure is 158 years old. Two-thirds of the 4,200 links of the chains were first used on the Hungerford Bridge and so these parts are even older; they date from c. 1840 and were manufactured around 182 years ago.

Over the years some repairs have been made to the wrought iron structure; the anchorages were strengthened in anticipation of motorised traffic in 1925 and 1939.  Also approximately 13 out of 162 wrought iron hangers have been replaced. Apart from this (and the replacement of the timber decking of the carriageway), the majority of the bridge is original.

While the chains, girders and rods are made of wrought iron, the parapet stanchions (curved uprights on the outside of the bridge) are made of cast iron. This is a more brittle material than wrought iron and is prone to cracking. The parapet stanchions are not structurally essential, but they do help to stiffen the deck. A survey using magnetic particle inspection carried out by our consultant engineers COWI, found 20 stanchions with cracks. Replicas had to be made for those that could not be refurbished. The replacement parts were forged using spheroidal graphite cast iron by specialist company, Dorothea Restorations Ltd. The x-rays – as I discovered – were of these replicas and were focussed on the weak points in the stanchion. They were taken to check for potential imperfections formed during the manufacturing process. It is good to know that the replacement parapet stanchions have been made to the highest quality.

But what about the bandage? Bridge Master, Trish Johnson, informed me that this was a grout sock used by the engineers when carrying out rock stabilisation works on the Clifton rock face. As a result of years of monitoring and research carried out by sub-consultants Geo-Design, it was decided to carry out preventative stabilisation work in 2021 in order to reduce the likelihood of rock slippage. The Clifton rock face is split by natural fractures and as the Clifton tower’s foundation loads are carried into the rock face it was decided that preventative action was needed as a precautionary measure. By inserting rock bolts which are 4-6m in length and 27mm in diameter around the edges of specific locations in the carboniferous limestone cliff, the slope could be stabilised. Grout socks were used around the bolts to reduce the loss of grout into joints and fissures in the hole that is drilled into the rock.

So, yes bandages and ex-rays do have their part to play in looking after old bridges and their environs; as does highly specialist manufacturing and engineering expertise. It was interesting to learn about the range of skills and research that is employed in caring for Clifton Suspension Bridge.

If you’d like to know more about these projects, you can read about COWI’s and Geo-Design’s work in the article Rock Steady by Khalifa Bokhammas published in Bridges & Engineering and downloadable from the top of this page.

Throughout the years the bridge has been illuminated to celebrate coronations and royal jubilees. It was lit with candles and fireworks in 1911 for the…