Workers at the Bridge 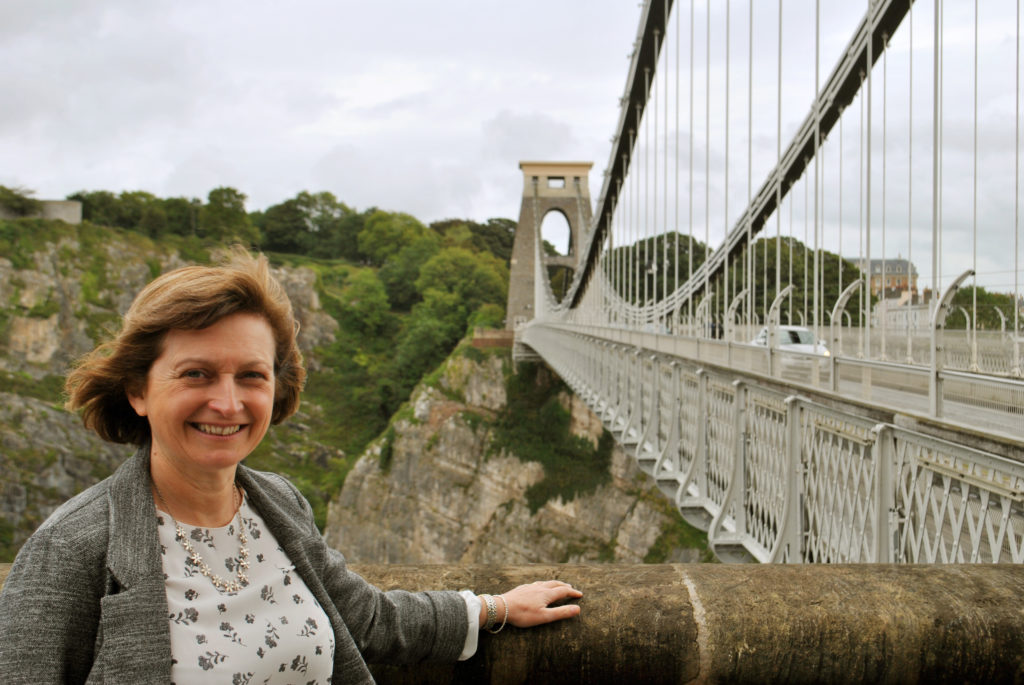 The Bridge Master is a Chartered Civil Engineer, which means having a university education as well as a professional qualification showing lots of relevant practical experience. Anyone can be a Bridge Master – but it takes lots of hard work and a long time to learn everything that you might need to know! The Bridge Master is responsible for the running of the bridge. It is a very active role and involves managing the bridge staff, appointing specialist contractors to maintain the bridge, arranging bridge inspections – and deciding if and when the bridge needs closing (e.g.: in strong winds or for important work to be carried out).

The Bridge Master reports to the Trustees, a group of twelve appointed volunteers with lots of experience in engineering, law and local issues. The Trustees are the custodians of the bridge and have taken on the responsibility of preserving and maintaining the bridge for the future.

The Bridge Master spends time interacting with the public, inspecting the bridge and looking at reports which monitor the weather and the movement of the bridge – but must also discuss the strength of the bridge with specialist engineers. The Bridge Master also organises staff recruitment, looks after the health and safety of all the staff and public on the bridge (for example finding a way to safely guide cyclists through the toll barriers or writing new instructions for the Bridge Attendants to make sure their work can be carried out safely).

“A lot of the time is taken in sorting out issues with the ancillary equipment, the toll system, the weighbridges, CCTV, the illuminations, weather stations. All these things are much more prone to have problems than the bridge itself. This job requires me to be on call 24/7. If there is an issue out of hours, I’ll get a call and I’ll be up here in no time. That’s a given.” – David Anderson, Previous Bridge Master 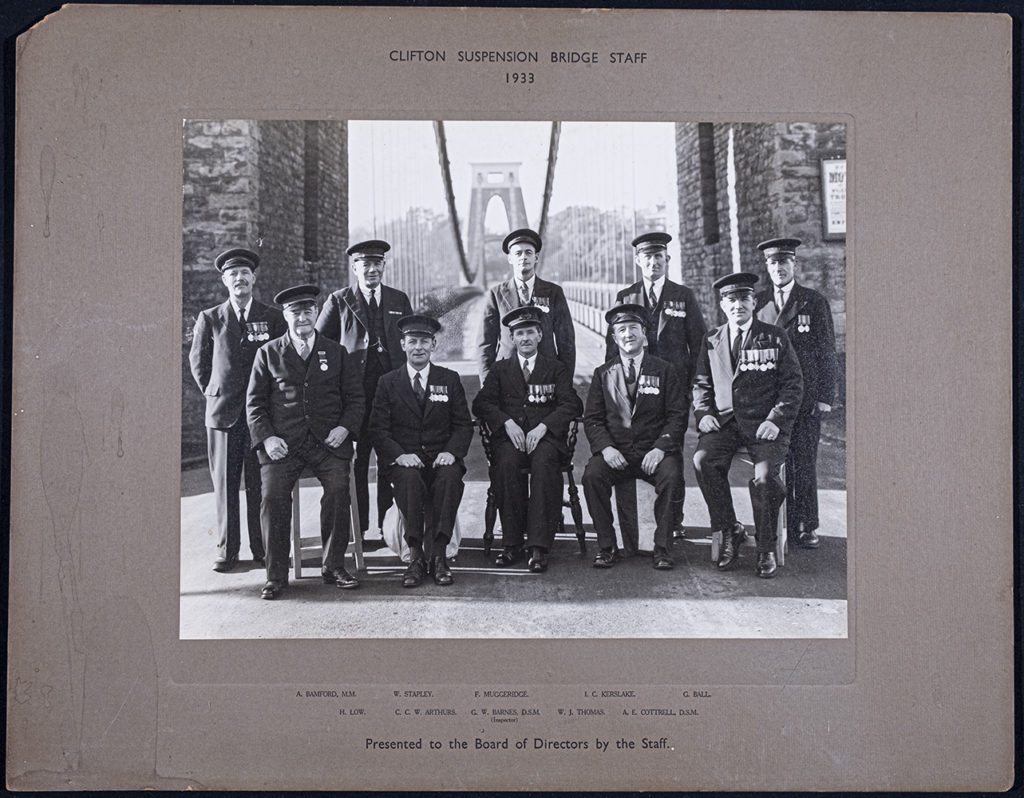 Bridge Attendants have always worked on the bridge and have always been present 24 hours a day, seven days a week. Attendants were first employed to collect toll money from people crossing the bridge, exchanging coins for tickets which would let them pass on foot, with their animals and livestock or in a carriage or motorised vehicle. Until the mid 1900s, some Attendants also helped to maintain the bridge by brushing away rust, painting and oiling the chains and carrying out other useful work. Today, bridge maintenance is carried out by a separate team.

“I have this image of Dad and one other on the chains 1940s, probably scraping out the rust between the chains. I remember him saying there’s a lot of rust that people don’t know about! He didn’t like working in the toll booth as he felt it was a bit boring and wanted to be out on the bridge. Of course as he was ex-navy he wasn’t bothered at all about heights. He enjoyed working on the bridge, he never complained!” – Mike Crozier

Today, the bridge has automated toll barriers. The Attendants are always on hand to give change to people who want to drive across and empty the toll machines when they fill up with coins. The Attendants also help any cars that break down or cannot cross, talk to any pedestrians who need directions or advice and keep the bridge looking nice and clean by picking up litter and emptying the rubbish bins. If a police car or ambulance needs to cross the bridge, the Attendants can stop all traffic and raise the barriers to help them cross quickly.

“If it snows we get called out to shovel all the snow off. The weight of the snow would stretch the bridge. You can’t use salt on the bridge because it will rot the metal. We have a van with a load of urea prills in the back – crystallised calf urine. We just tow it across the bridge and it sprinkles out, like a miniature spreader, but on the back of the van. When it goes off it smells of ammonia. You put it on and it doesn’t do anything until someone walks on it or drives on it and it crushes the crystals. Then it works.” – Don Midlane, Bridge Attendant

Inside the toll booths, there are CCTV cameras which give the Attendants a good view of the bridge so they can maintain the safety on the bridge. There are even infra-red cameras so the Attendants can clearly see what’s happening at night! The weighbridge, which checks the weight of every vehicle crossing the bridge, is connected to the toll booth. If a vehicle weighs more than 4 tons, then it is too heavy to go across and the weighbridge alarms will sound. The weighbridge machine prints out a reading which can be shown to the driver of the vehicle. The Attendants will then help them to turn around and find a better route to their destination. 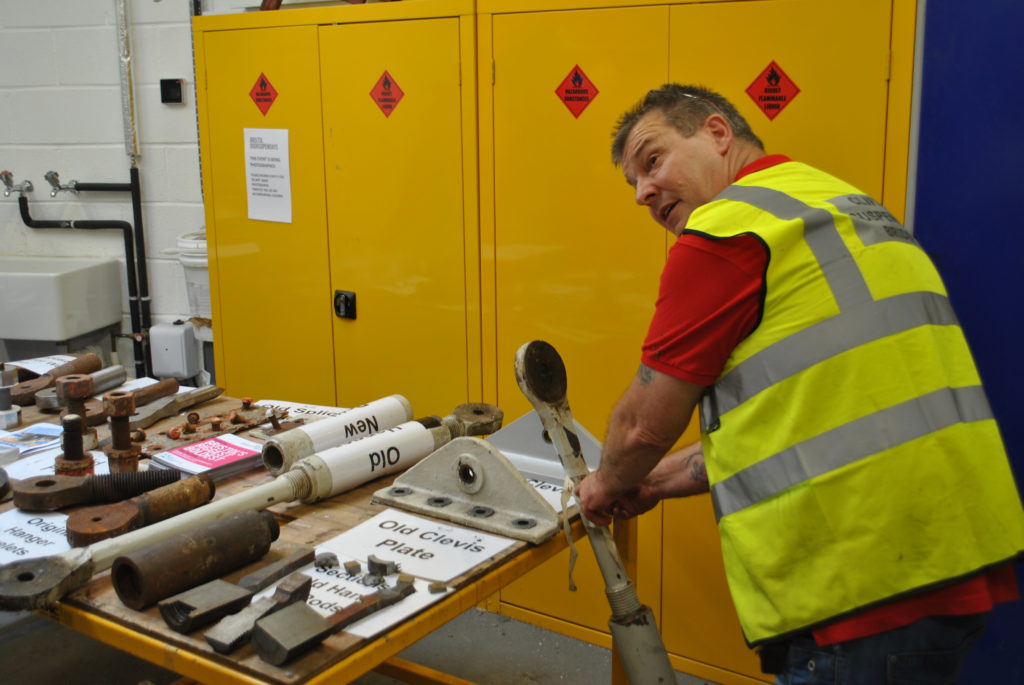 The Maintenance Team are always on site at the bridge. They carry out day-to-day repairs and inspections and look after everything from road signs, traffic cones and road cleaning equipment to landscape gardening and tree pruning to the nuts, bolts and rods on the bridge. Until 1986, people carrying out maintenance at the bridge were able to ‘walk the chains’ (walk up and along the bridge) without wearing any safety equipment at all – but today this job can only be done by specially trained contractors who are wearing full personal protective equipment (or PPE). This includes a hard hat, high visibility jacket, steel toecap boots and, most importantly of all, a safety harness!

“My initial interview, at 20 years of age, was to walk the chains. To walk the chains then, there were no safety measures and at my interview I walked into the tower and my supervisor said to me, “Well, you’ve gotta walk down the other side now!” Which I did, and here I am. The rest is history; I’ve been here ever since. The main maintenance jobs on the bridge in general are taking out the rods to inspect them. There’s the general upkeep of the bridge; anything you can see, there’s maintenance to be done.” – Nigel Neville, Ex-Maintenance Manager

The Maintenance Team carry out any jobs on the bridge that need doing. They might re-lay some paving stones to make sure they are flat, sweep away autumn leaves or clean and repaint parts of the bridge which look as though they need some care. They also help with improvement works (such as creating new paths or fixing and repainting the toll houses) but they also have an important annual schedule of work. Each year, the maintenance team must help to check the hangers (the long poles which connect the bridge deck and suspension chains) for weaknesses by removing one for testing. They must also lower someone into the anchorages beneath the bridge to inspect them and go down onto the gantry which hangs underneath the bridge deck to change nuts and bolts.

“We’ve still got to be able to walk the chains, but we don’t do it so much now, we do it by cherry picker, scissor lift or floor inspections. Since 2009 we’ve have had to change 64 rods. From the centre of the bridge out is where it takes the most load. So that is where all the work is done. To get a rod out we have to put 10 tons of pressure on with a hydraulic jack. You use a strap which goes over the chain and pulls the chains down and the deck up, so we can get the rod out and the jack stays in place and is taking up the load. Each rod is taking up to 3.5 to 4 tons of loading, which really incredible.” – Nigel Neville, Ex-Maintenance Manager

If you’d like to work on the Maintenance Team, you will need to be very strong, good at working at height and climbing ladders and ready to get really mucky! 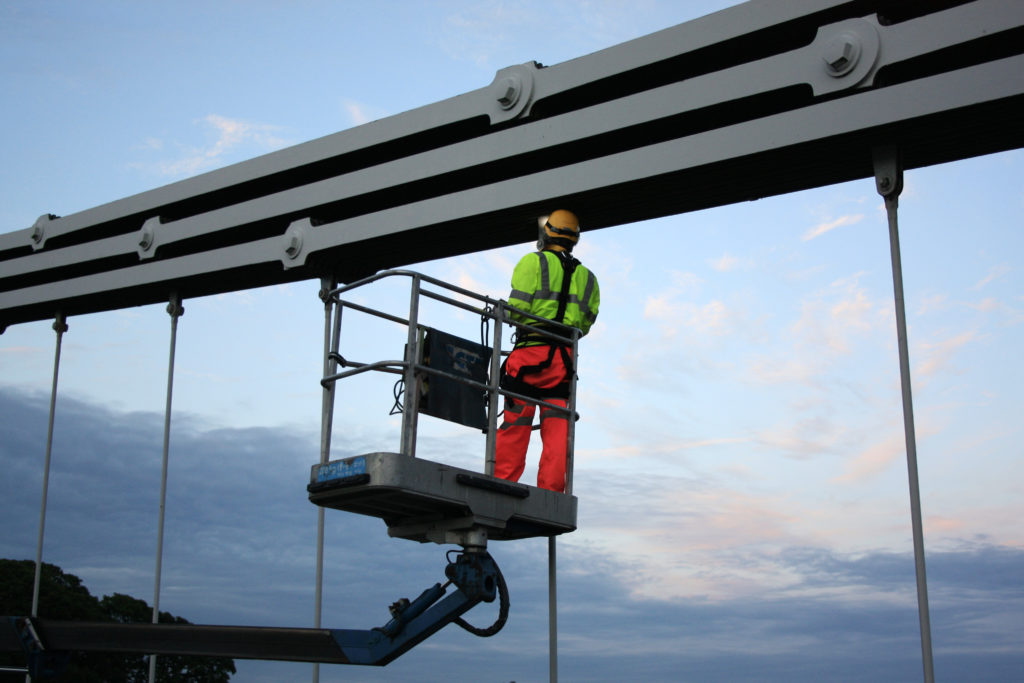 The Bridge Master employs lots of specialist contractors (people who are very good at one particular job) to carry out work on the bridge. Contractors might come to look after the CCTV system, the bridge illuminations, the weighbridge or toll machines – or the bridge itself. Rope access specialists can abseil off the side of the bridge to inspect the stonework of the bridge abutments or the rock face of the gorge itself. A special paint is used on the bridge to stop it rusting and paint removal experts need to bring their own tools. Companies who put up scaffolding need to be good at working with historic buildings so they do not damage the bridge.

An engineering company is employed by the Bridge Master to look after the bridge. Each year, they carry out an annual inspection to make sure that the bridge is working properly. They also carry out an annual maintenance programme and can help with big or complicated tasks which require lots of planning or specialist equipment. Some of the projects the engineers work on will take six or more years to complete. The engineers have made computerised models of the bridge so that they are able to test out new ideas or work out what could happen in an unusual situation such as an extra heavy snowfall – which means that they are also available to help with or advise on any project work (such as the recent restoration of the towers). They know the bridge very well so could be contacted in an emergency if they were ever needed.

The engineering company don’t just look after the Clifton Suspension Bridge: they work on other bridges, football stadiums, theatres, churches and big historic buildings all over the world!