History of the bridge illuminations

Illuminations have played a significant role in the enjoyment of the suspension bridge since it was completed in 1864.

As part of the opening ceremony, the bridge was illuminated using state of the art electric lighting, limelight and magnesium lighting. Unfortunately, the wind was very strong and repeatedly extinguished the magnesium flares to the disappointment of the crowds. 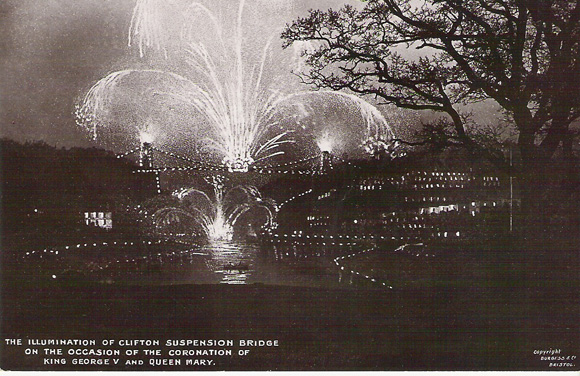 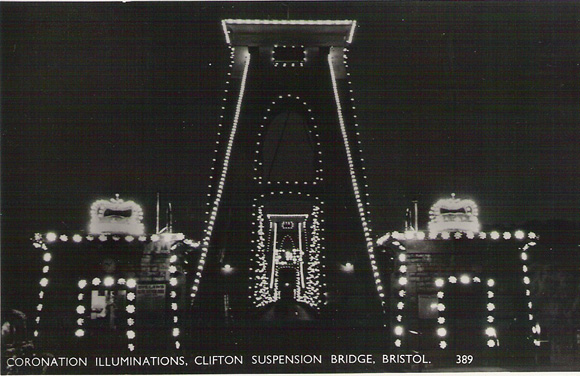 In 1959 Jane Atkinson photographed the illuminations. She revisited the bridge in 2015 with the same equipment to recreate the moment. Jane says: “When I was 8 years old, the bridge was lit up with strings of bulbs. It was a special occasion so Dad agreed to help me take a photograph. We carried our tall boy, mats and Box Brownie to the top of the Rock Slide. I was only allowed to take one picture and had to keep the camera absolutely still for one minute. It’s one of the best pictures I’ve ever taken!” 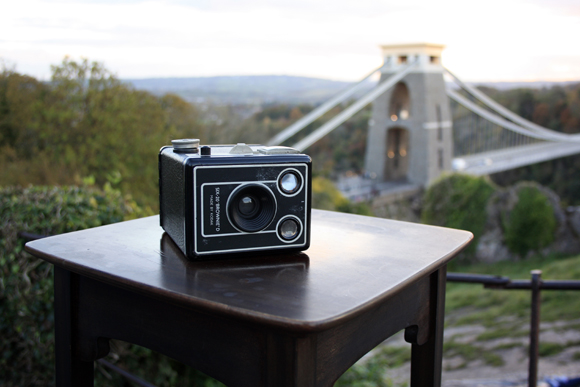 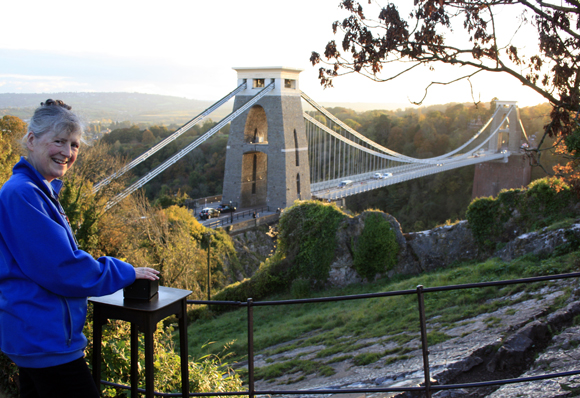 Above: Jane on Observatory Hill with her camera and tall boy. 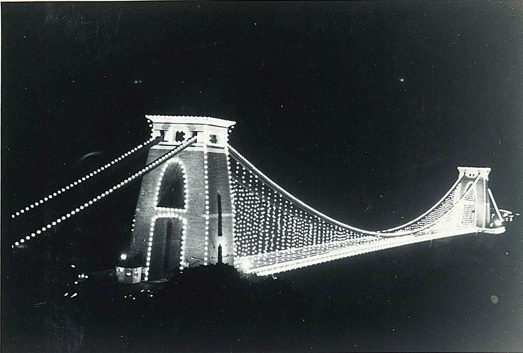 By 1979 a new lighting scheme had been installed based on a festoon system of 4,200 x 25w filament lamps. This system was vulnerable to vandalism and corrosion and in common with the previous system, presented difficult health and safety issues when trying to replace lamps on the rods and chains.

By 1991 the system had reached the end of its useful life and was replaced by the Guide Lite system which consisted of tiny incandescent lamps contained in rectangular polycarbonate tubes that traced the outline of the bridge towers, chains, rods, abutments and the tollhouses. That system suffered problems of corrosion, lamp failure, connection failures, pecking from birds as well as dimming as a result of erosion of the polycarbonate. The strips also trapped debris that discoloured the rods and made cleaning problematic. The ageing units became badly discoloured by the harsh environment and repairs to the system needed to be frequent and were hazardous, particularly work on the rods, chains and the sides of the towers, often hampered by wind and rain.

The removal of the Guide Lite was completed in October 2004. 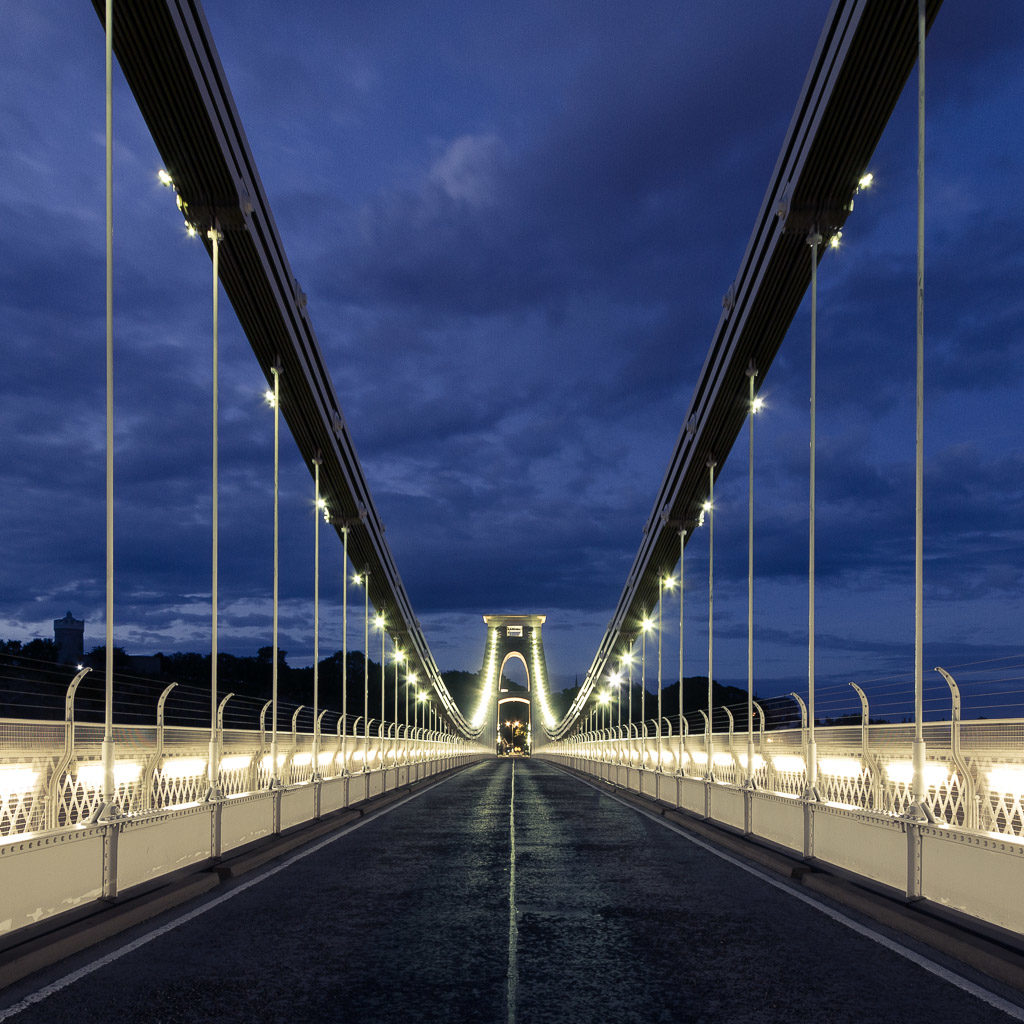 The current illuminations were installed in 2005/06 by Pinniger & Partners who have also been responsible for the illumination of such structures as Gatwick and Heathrow airport extensions, the Jiangyin Suspension Bridge across the Yangtze River in China and the Humber Bridge. The lights provide an award-winning display and have been designed to reduce energy consumption and minimise light pollution and bulb replacement. The illumination of the suspension chains uses low power light emitting diodes (LEDs). These bulbs are expected to last for around 15 years. There are 2796 such bulbs (3 per fitting on 932 fittings). With all the other fittings, there are a total of 3072 bulbs. Most of the lights are not run at full power, but are dimmed down to save energy while maintaining the highest quality of display. The new illuminations consume 12.7Kw/hr, more efficient than the Guide Lite system which had a power consumption of 23.7 kW/hr.

Most of the lighting is turned off at midnight, and the remainder is dimmed down further to give only the level of illumination needed for pedestrian safety. After midnight, the safety lighting consumes just 2.8 Kw/hr. As far as possible, the design took full account of the recommendations of the “Guidance Notes for the Reduction of Light Pollution” as published by the Institute of Lighting Engineers.

“Unlike the old funfair-effect fairy lights, which were really a light show, the new illuminations have been designed to emphasise the aesthetics of the bridge itself. Lights which shine out from the bridge are being replaced with light reflected from the Grade I listed structure so that people can admire its form.”
Dayrell McArthur, Chairman of The Clifton Suspension Bridge Trust (2004)