In 2002 twelve vaulted chambers up to 36 feet (11m) deep were discovered within the Leigh Woods abutment, a massive 33.5 m (110 ft) high, stonework structure which rises from the rock of the Avon Gorge to support the bridge tower. The abutment was built between 1836 and 1840 by Isambard Kingdom Brunel; the first part of the bridge to be constructed.

Although vaulted chambers are not uncommon in bridges and railway stations in Victorian times, all drawings related to this early phase of construction were lost – probably when works ceased and the site closed down in 1853 – and the exact structure of the abutment was lost to history. Engineers suspected that the structure was hollow but borehole investigations carried out in 1969 managed to miss the chambers and hit the solid structure. 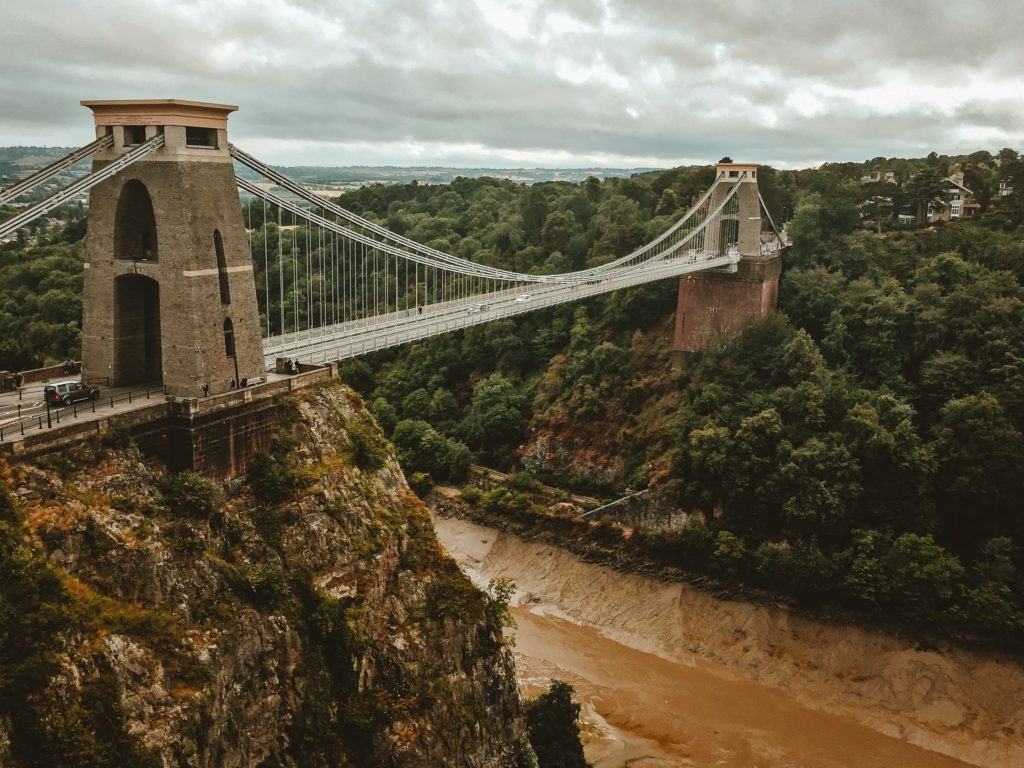 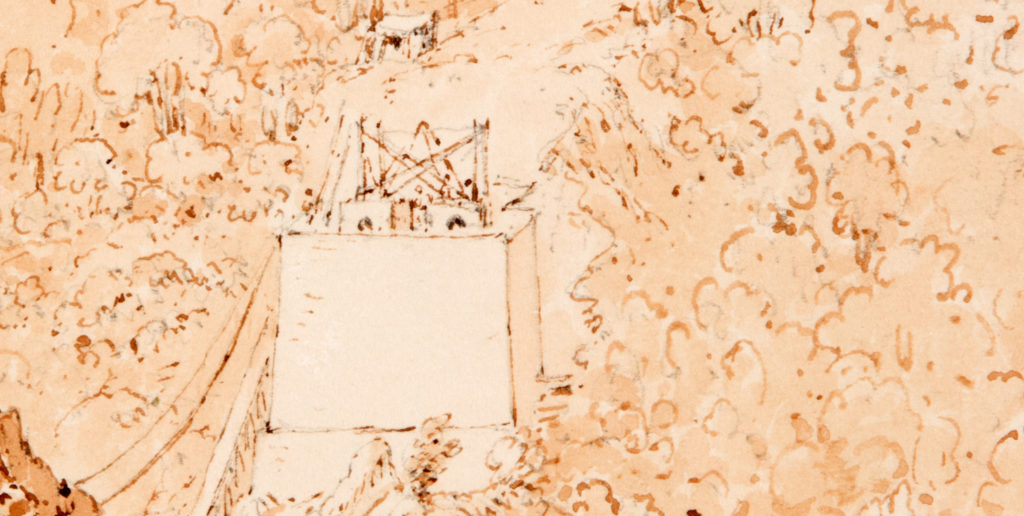 In 2001 The Clifton Suspension Bridge Trustees decided to find out more about the form of construction of the Leigh Woods abutment and its internal condition. The Trustees also wanted to establish the source of the limescale on the face of the abutment and whether the material leaching out of the stonework was weakening the structure. Subsequent high-tech electronic surveys undertaken revealed that there are metal bands buried within the stonework at four levels, which appear to wrap around the face and sides of the abutment. The surveys also indicated the possible presence of a shaft under the north footpath, corresponding to an existing shaft below the south footpath. An overall analysis of the results suggested that the abutment might not be of uniform construction.

In 2002, during works to resurface the abutments, two railways sleepers were unearthed which covered the entrance to what turned out to be a fifty foot shaft leading into the chambers. Ray Brown, who made the discovery told us the story:

“After we’d excavated and reduced the levels for the formation for the paving, I was inspecting it before we put the stone in and I found this hole. When we cleaned it out, there were two pieces of timber, like railway sleeper over the top and it looked like a well shaft. When I put my tape down there it was 15 metres drop. We didn’t know at that time, that it was a shaft into an underground chamber.”

Martin Rogers, Senior Surveyor of Glanville Consultants wrote at the time about the opportunity to survey such an unusual space and establish exactly what existed under the ground:

“I first got wind that life was about to get interesting when my boss Chris Edge called me and asked whether my confined spaces training was up to date. He then went on to ask if I was prepared to be lowered into a fifty-foot shaft in order to survey some underground chambers in Bristol. Well, it was that or back to some run of the mill survey work so of course I was interested. I seem to remember comments like ‘you must be mad!’ and ‘can I have your car?’ being bandied around the office at this point!”

Together with rope access specialists John Corber and Guy Barrett of Hi-Access and Bridgemaster John Mitchell, the team set out to explore the system.

Guy told us; “The first shaft that we went down was on the upstream side of the abutment of the pier and I was lowered down into it – went down through the hole and after about 20 feet or so there was a tunnel going out horizontally either side of me – each of those tunnels probably about a size that I could get through: just! There were stalactites, or the calcite deposit from the lime mortar that had dripped down through the bricks, and then they carried on lowering me down. I went down probably another 40 feet or so and there was another set of tunnels leading horizontally either side of me, exactly the same thing. And then went down eventually to the bottom, was probably another 20 feet beyond that just down to rubble in the bottom of this brick shaft. It opened out into a chamber 30-40 feet high and wide. Once we’d gone inside that we got to the bottom of that and found all sorts of tunnels leading off in a sort of honeycomb. The real sense of excitement was going somewhere that nobody else has been since the Victorians!” 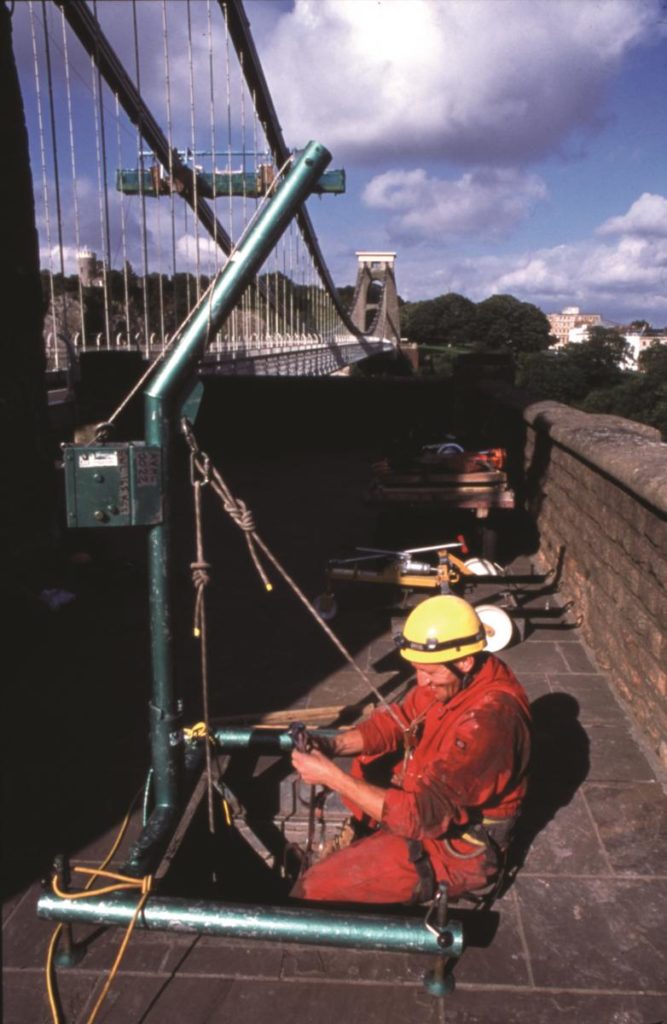 John prepares to explore the vaults

The first job the engineers faced was to map and inspect the chambers to ensure that the structure was safe and there was no risk to the bridge. Martin explains how this was done:

“The network is connected by a series of two-foot diameter access tunnels mostly about eight feet long. The problem lies at the intersections with the shafts, the bottom of the shaft lies between fifteen and fifty feet below (believe me even a fifteen foot drop seems a lot in a three foot diameter shaft, especially when you’re already fifty feet below the surface). Transfer is made by heaving out over the drop using the safety line, then twisting round to get your feet into the next tunnel. Oh yes, you’re clipped on to the safety rope but it’s still a funny feeling! Next, all the survey gear, lights, breathing apparatus,” kitchen sink” etc has to be manhandled through. All in all this simple task of moving twenty feet or so took about half an hour. Now, I thought that the first two [corner] chambers were impressive but the central vault was cathedral-like in comparison. Where the smaller chambers are like inflated cubes this was a huge vault like those seen in ancient catacombs.”

In all, there are seven vaults on the first floor level and five on the basement level. On both levels a long and impressive central vault is surrounded by four tall chambers with a squarish footprint; now known as the Corner Vaults. On the first floor level, two further vaults can be reached through a corridor from the central chamber. The final chamber, known as Vault Three, sits in the triangular space where the flat road surface created by the abutment joins the top of the sloping rock face. 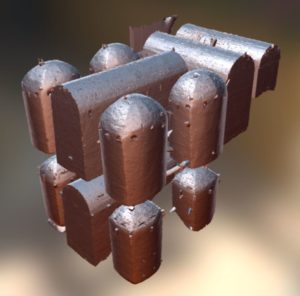 A digital survey shows the layout of the chambers

Martin says: “the doorway into the final chamber is a luxurious two by three foot rectangle. This chamber has to be my favourite: the stalactites and stalagmites are joined together and there are simply hundreds of them!”

To make access easier for inspection work, a doorway was later cut into the side of the abutment to allow access directly into Vault 4. This project took ten days to complete as the wall was almost two metres thick! Tours of the Vaults began in 2017, allowing members of the public to view the larger chambers; Vault 4 and 5 on the first floor level – no abseiling required! Tours take place between Easter and October each year and are pre-booked entry only.