This week, we announced the commencement of a project to construct new toll houses which will provide a compact, modern working environment for our Bridge attendants with the necessary spaces, amenities and facilities to enable them to operate effectively 24 hours a day, 7 days a week and 365 days a year. But why do we need to do this, and what does it mean?

The bridge is owned and operated by the Clifton Suspension Bridge Trust (CSBT), a non-profit-making registered charity set up under an Act of Parliament of 1952. The maintenance and upkeep of the bridge is entirely funded by tolls, as CSBT receives no funding from any other source, such as grants from central or local government. The bridge is opened and manned 24 hours a day, seven days a week and it is estimated that over four million vehicles now cross the bridge each year. When the bridge opened in 1864, two day and two night collectors were employed to collect tolls. Today the present toll houses are staffed by a team of thirteen Bridge Attendants who provide a more complex and important management and security role for the Bridge and its users. Bridge Attendants are the first point of contact for road users and visitors. They assist with problems; monitor the use of the toll machines and barriers to ensure an efficient flow of traffic; keep loading conditions stay within acceptable limits; monitor CCTV cameras, weighbridge and lighting; patrol the bridge in all weathers; note maintenance requirements and health and safety issues; assist with basic maintenance tasks such as cleaning the paths, changing toll barriers and spreading de-icing material; and provide temporary traffic and pedestrian controls.

Replacing the existing toll houses offers an opportunity to design new attractive buildings that respond better to the context of the listed Bridge and also to provide up-to-date accommodation for the staff that meets modern operational requirements.

The two toll houses located on the Leigh Woods side of the bridge are original to Barlow and Hawkshaw’s design and of high historic value. These original toll houses provide evidence of historic construction methods, in particular the work of the stonemasons who crafted the pennant stone and limestone cappings. Each toll house retains the stone gate posts which originally supported large gates to close the road bridge along with several examples of decorative ironwork, including two pairs of gates to each of the public walkways. The external finish of the toll houses is of high quality and the deep overhanging cornice and the use of pennant stone alludes to the design of the bridge piers. Furthermore, the Egyptian style ‘Cavetto’ cornice is a discreet reference to Brunel’s original design of 1831. It reflects the design of the cast iron cornices on both piers.

In 1956 it was noted that there was no damp proof coursing in the toll houses and that the wooden floors became rotten fairly frequently. The walls and plaster inside the toll houses were damp and the buildings were inadequate for working requirements. An enquiry was made regarding the viability of tiling the floors of the toll houses in contrast to wholesale replacement of the buildings. In 1958 the two original toll houses on the Clifton side of the bridge were demolished to make space for modern replacements, but in 1959 the bridge received Grade I listed status, marking the structure’s exceptional historical importance. Only 2.5% of listed buildings in England are designated Grade I and the original Leigh Woods toll houses themselves received this status in March 1984.

There are no plans to demolish or replace the two surviving houses, but as part of the 2019 renewal project the interiors will be refurbished, and roofs and stonework repaired. 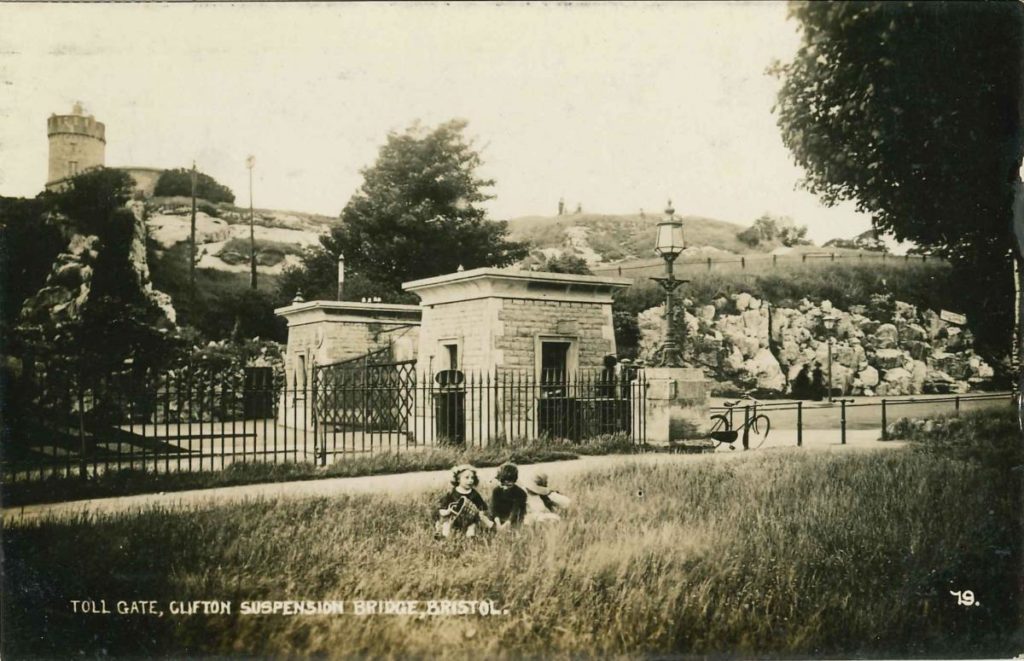 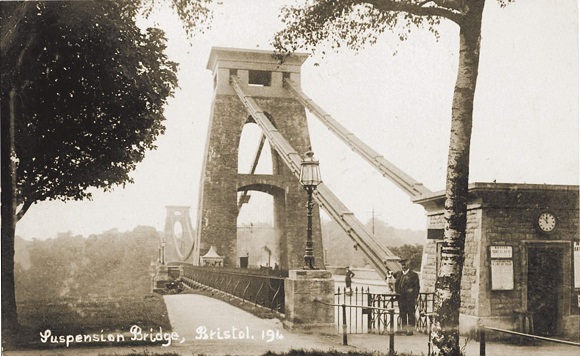 The Clifton toll houses were designed and built between 1958 and 1959 and house the staff facilities as well as acting as a toll house for the Clifton side of the bridge. They replaced a pair of toll houses dating from 1864 of identical design to those located on the Leigh Woods side of the bridge. At that time the toll houses were considered to be a necessary upgrade to the existing buildings and were built in response to the added pressures brought about by the increased numbers of cars as the twentieth century progressed.

The style and construction of the Clifton toll houses is fairly typical of the late 1950s period and reflect contemporary building practices of the day. However, they have little relation to the architecture and construction of the bridge or the toll houses they replaced, aside from the stone used to clad the outside of the building. The 1967 History of the Clifton Suspension Bridge stated that the opinion of ‘regular bridge users’ was that the new toll houses were less picturesque than the old buildings and the buildings are still considered a generally unsympathetic addition to the bridge, which are not in keeping with the bridge or its surrounds.

Today the utilitarian interiors with their 1950s fitted cupboards and desks are not considered fit for purpose and it was proposed that alterations needed to be made to ensure the bridge continued to operate efficiently. The fabric of the buildings had deteriorated to such a degree that significant refurbishment or demolition had to be considered. The building envelopes include asbestos, which will have to be removed as part of any refurbishment, whilst single glazing contributes to the significant heat loss during the winter months and overheating in the summer. Further issues relating to the poor placement and arrangement of the buildings meant that significant alterations would be required to rectify them, and this led to the need to replace the houses with a new set of buildings, giving an opportunity to create an appropriate design response to the setting whilst providing a sustainable, low maintenance approach for the new building fabric. 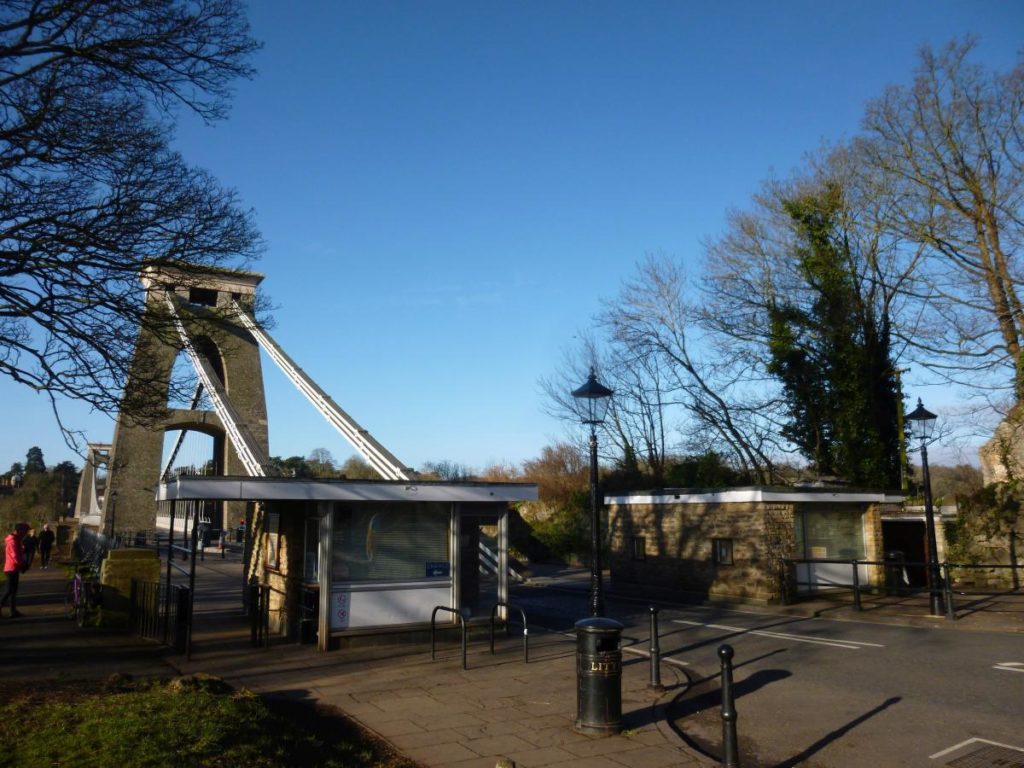 1970s – The ‘new’ Leigh Woods Toll House
In addition to the historic toll houses, a further toll house was added to the Leigh Woods side of the bridge during the 1970s. This small block is built into the retaining wall north of the original toll houses and is less visible within the landscape than the main toll houses when viewed from the Leigh Woods approach. This originally functioned as a toilet block but was converted to operate as an additional toll house during the 1990s. This later building was built to match the style of the existing buildings and features similar moulded stone window surrounds, though the style of the windows themselves is vastly different to the original buildings. The current Leigh Woods operational house is considered too small for efficient and comfortable use, with seating for just one member of staff. 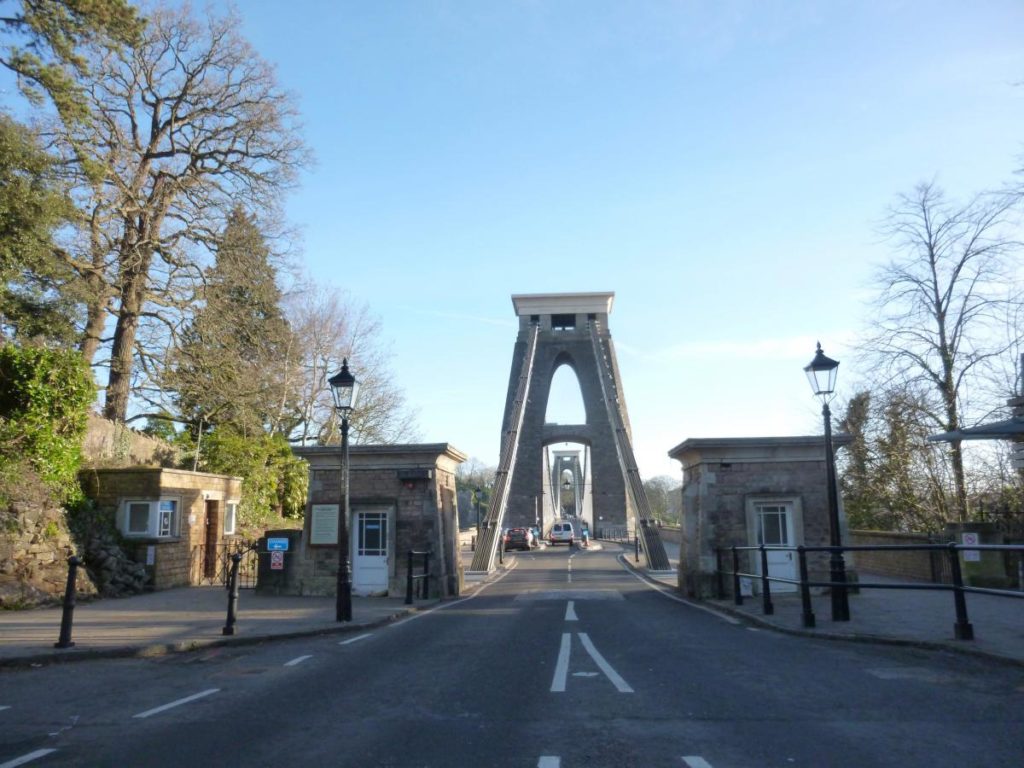 Following numerous workshops held with interested groups and organisations, a public exhibition and consultation with Historic England (formerly English Heritage), Bristol City Council and North Somerset Council, designs for new toll houses have been approved and finalised and work is now underway. During the workshops, stakeholders discussed the brief and requirements for the replacement toll houses, looked at materials and precedents from other similar buildings and worked with Purcell Architects in sketching out a number of possible plans and layouts. It was agreed that any new buildings should not disrupt key views of the bridge, must be sympathetic to the scale and materials of the bridge and also of the surrounding heritage context.

Although replication or the creation of a pastiche of the buildings which preceded the existing Clifton toll houses would help to restore the historic views of the bridge, reintroduction of the original designs was not considered appropriate. Therefore, the new toll houses are of a contemporary functional design that will provide all the facilities and requirements of the brief whilst also creating a more fitting and attractive approach to the bridge. The Clifton toll house design responds to the material quality and strong symmetry of the bridge towers through the use of sandstone and raking façades. The palette of materials features pennant sandstone, zinc for the roofs and fascias, and dark metal panels and reveals line the openings. The proposed Leigh Woods operational toll house is deliberately subservient to the original Victorian toll houses in terms of its position and height. The material palette mirrors that used on the Clifton houses, providing continuity and integrity across the bridge. 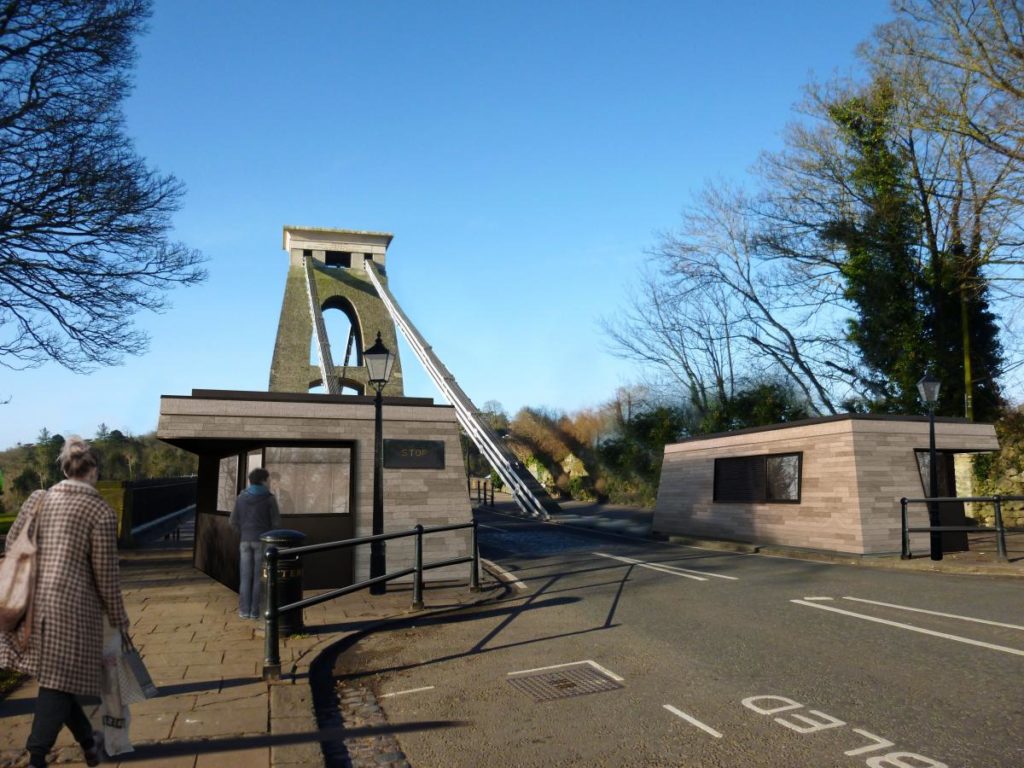 The design for the new Clifton Tollhouses 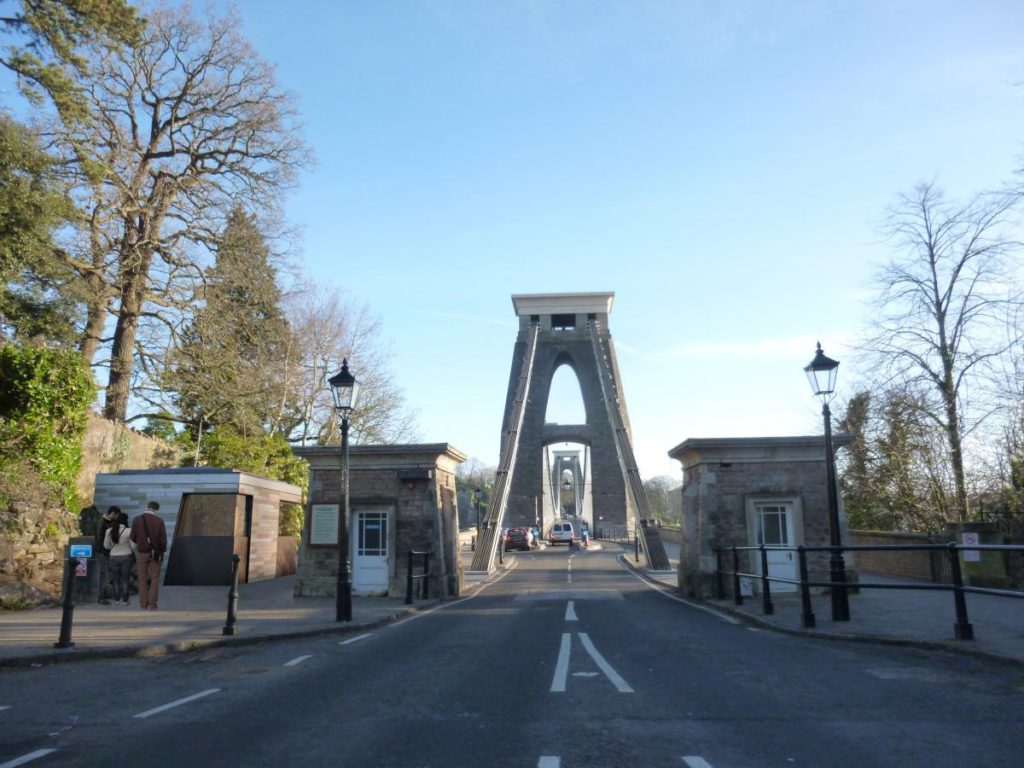