Our summer work programme began in Easter 2015 – but what’s actually been going on under that scaffold wrap? Over the last seven months, we’ve been watching the work and taking photos…

Why was the work carried out?

In 2000, The Clifton Suspension Bridge Trust commissioned a study of the bridge stonework by Bristol-based conservation specialists, Ferguson Mann. Their report recommended that a campaign of repairs and conservation was needed to minimise the risk of deterioration and to safeguard the historic fabric of this world-famous Grade 1 Listed structure. Between 2001 and 2002, Bristol City Council, North Somerset Council and English Heritage were consulted. Due to the scale of the proposed operations and the fact that the repairs could create minor changes in appearance, Listed Building Consent was required. This was sought and secured in 2009. Between 2010 and 2012 important repair works were carried out on the red sandstone abutments which support the towers but there was still plenty to be done up top to keep the bridge in good working order.

Clifton Suspension Bridge is maintained by a Charitable Trust which receives no outside contributions towards its costs, either from central or local government, or from lottery funds. The bridge is entirely dependent on the tolls paid by bridge users to fund all maintenance work. The campaign is being carried out in two phases programmed to run over a seven-year period.

Work at the bridge is ongoing and there’s always something for our dedicated Maintenance team to do! The 162 hangers on the bridge are regularly inspected visually for cracks and to check the condition of the pins and bearings.This year the short hangers were removed one-by-one to inspect the condition of the pinned joints, and to ensure they were free to rotate. To do this, A pair of 6 tonne pull-lifts are used to remove the load (the weight of the bridge) from a hanger. They are attached to the suspension chains using slings and the longitudinal girder using beam clamps. The entire lifting system was designed especially for this task. In the picture below you can see that a hanger has been removed and the lifts are holding the weight of the bridge.

It took six months to remove, inspect, replace and repaint the hangers. 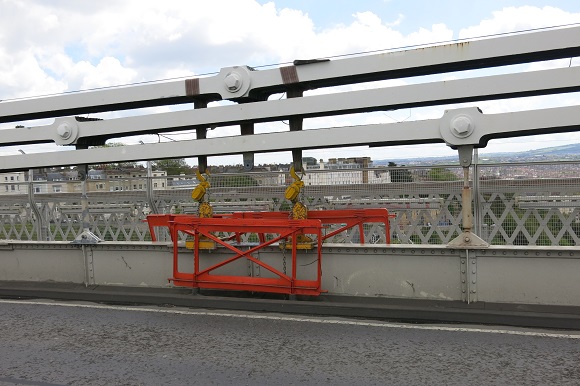 This tower was built 175 years ago, between April and November 1839, one year before the tower on the Leigh Woods abutment. The contractors were Brown & Son. The Clifton Tower is 26m/86ft high (including the cast-iron cornice) and is estimated to weigh 4,065 tonnes/4000 tons. It is constructed of grey Pennant sandstone. The base supporting the saddles and the pillars supporting the cast-iron cornice is of Bath stone. Brunel’s obituary in the Royal Cornwall Gazette records this to be the site of one of his legendary exploits. During construction, it was necessary to make a level from this abutment to the other. “For this it was required to drop the plumb over the road and the river. Brunel directed a plank to be pushed from the top of the pillar, fixed it by placing several men on the end which rested on the stonework and then himself walked to the end of the plank over an abyss of 250 feet deep, dropped his line, made his calculations, and returned.”

The Condition Report undertaken in 2000 concluded that the stonework of the tower was in a remarkably good state. There had been some natural weathering and eroding of stone and mortar surfaces, with some accelerated deterioration in areas where the protective surface had been lost. Remedial work was specified where vegetation growth or embedded ironwork had caused minor damage. The most damaging effect was that caused by cement pointing of previous repairs, including damage to surrounding stone surfaces and edges in certain areas. It also had a detrimental visual impact on the structure and, where viable, its removal was desirable for aesthetic reasons as well as long-term maintenance.

In April, scaffolding began to appear around the Clifton Tower. It took over a month to put up. The scaffold included a ‘safety fan’ approx. 4m above road level, to protect pedestrians and traffic. It was shrink-wrapped to prevent dust and debris falling onto bridge users or into the gorge. As scaffolding the tower was a huge undertaking, the programme of work included lots of smaller tasks as well as the main refurbishment and restoration work: 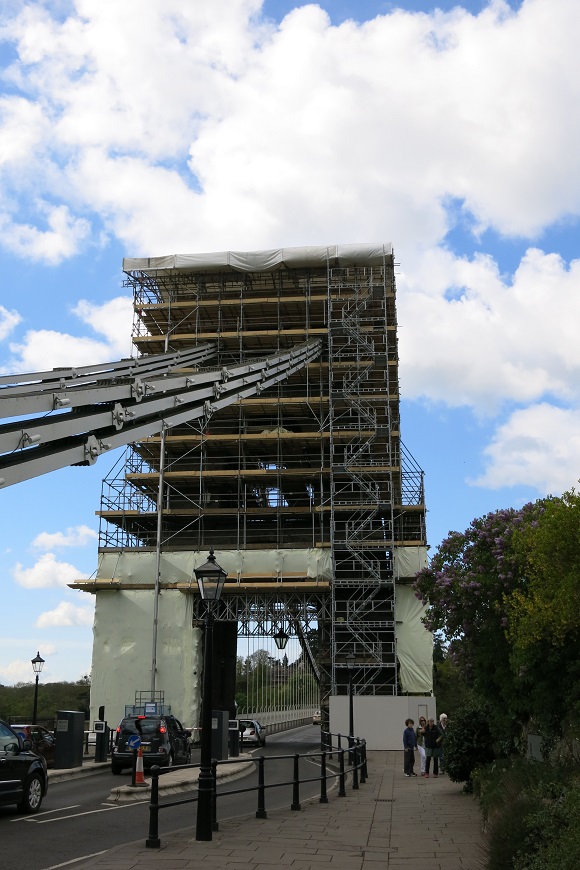 Works were conducted by Ferguson Mann Architects, Flint & Neill (Consulting Structural and Civil Engineers) and Wood Group PSN. We were privileged to be able to go and inspect the tower before works began and were shown around the structure by Peter who has previously completed projects on Durham Catherdral, the Forth Bridge and Cardiff City Hall. Peter was used to working at height and fitting scaffolding around strange and unusually shaped structures! 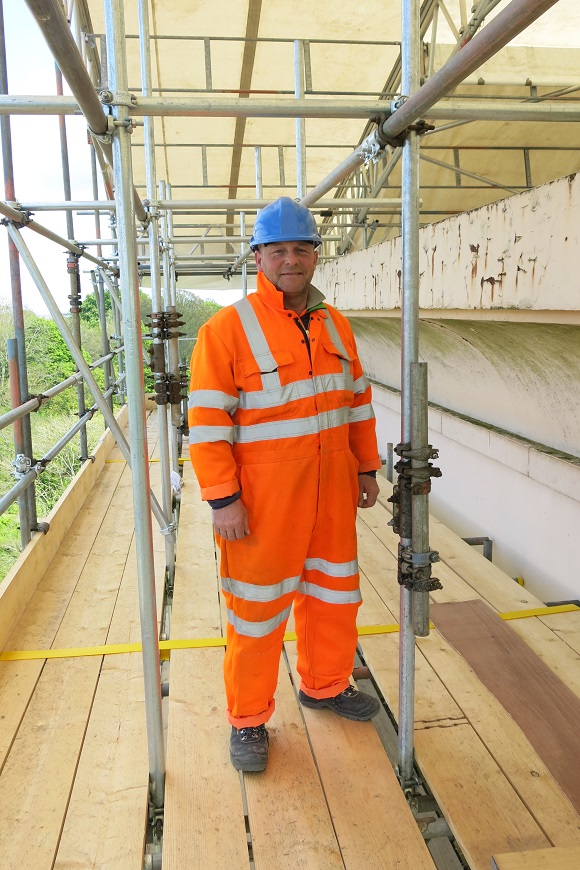 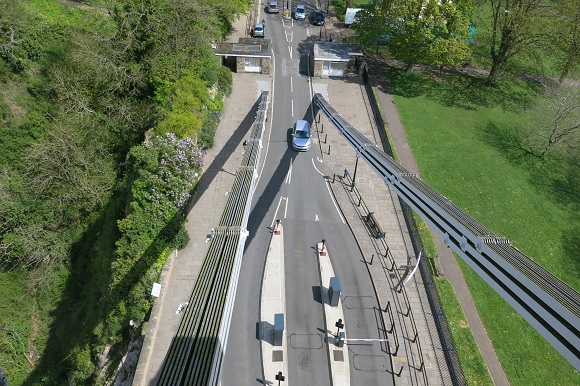 A number of levels were created to provide easy access to all parts of the stonework. 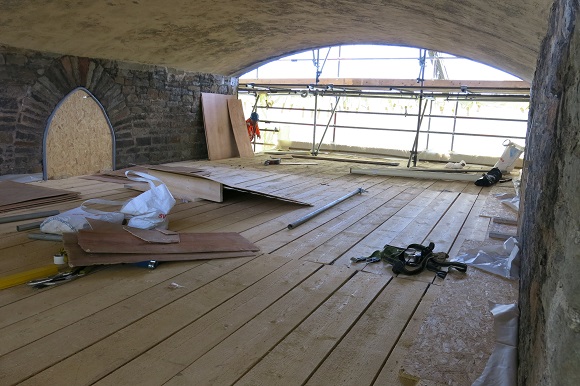 In these images, it is easy to see that the iron caps at the top of the tower were in need of some care and attention. Cleaning, repainting and rustproofing these important parts of the structure was very important! 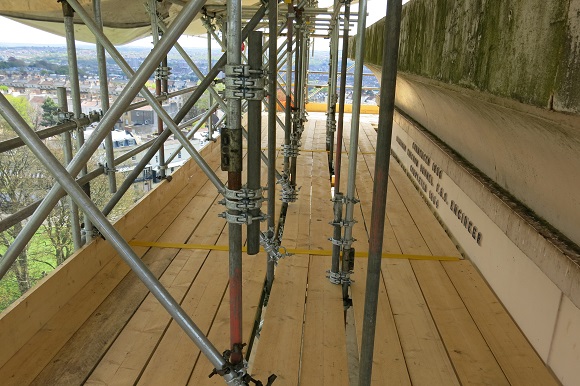 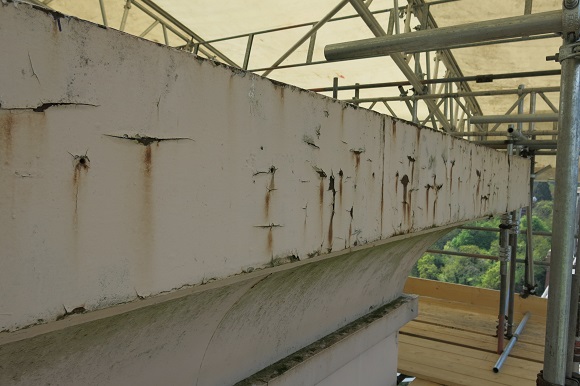 By September, the work had been completed and the scaffolding was ready to come down. Although most of this work could be carried out whilst the bridge was open, it was not possible to clean and repoint the stone work inside the archway until the bridge was closed to traffic. Closures took place in off-peak periods to minimise the disruption to commuters. 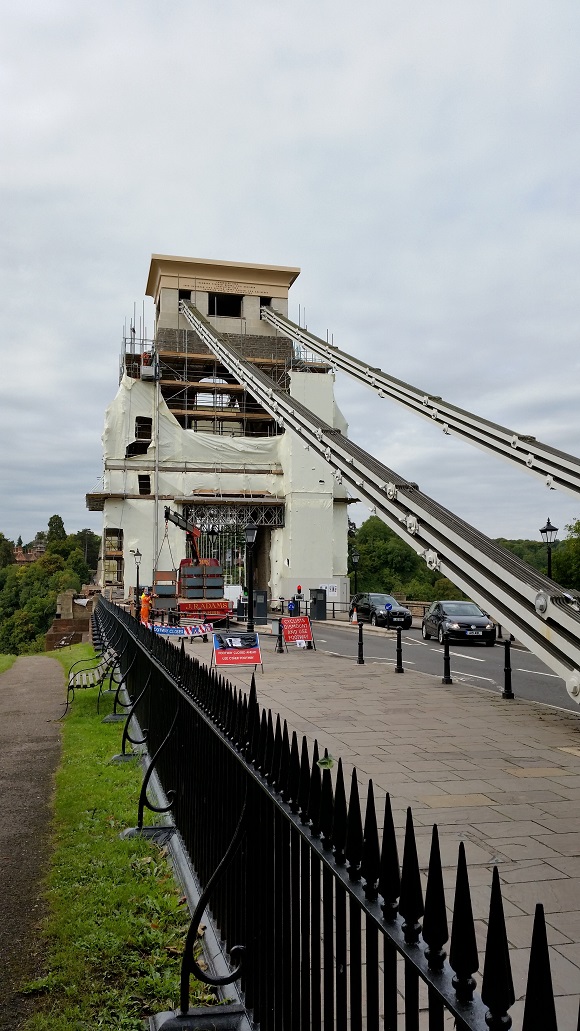 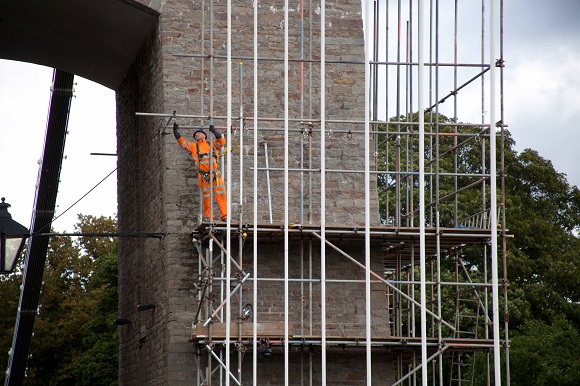 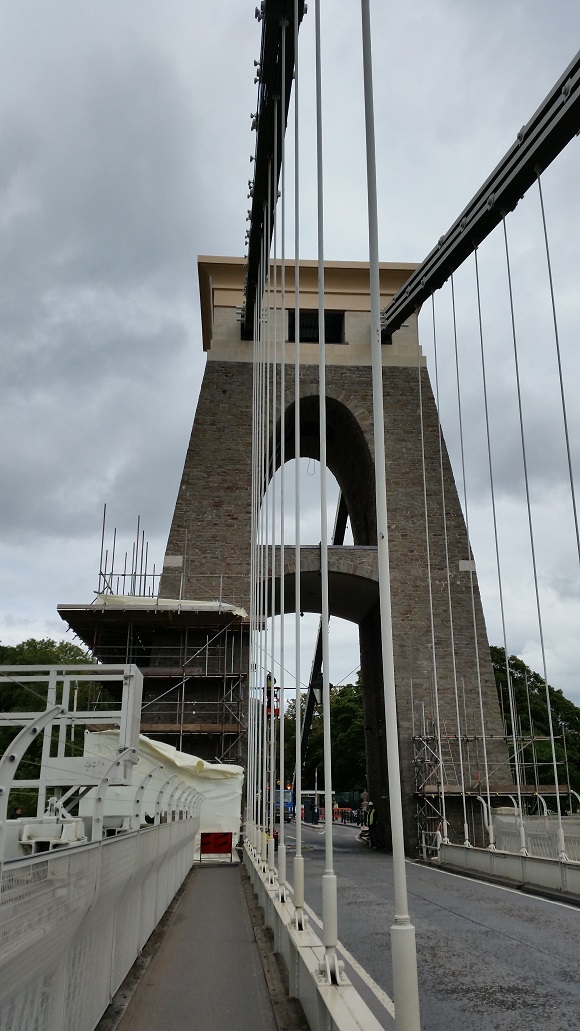 Here’s the tower after work had been completed. The natural colour of the stone has been restored… 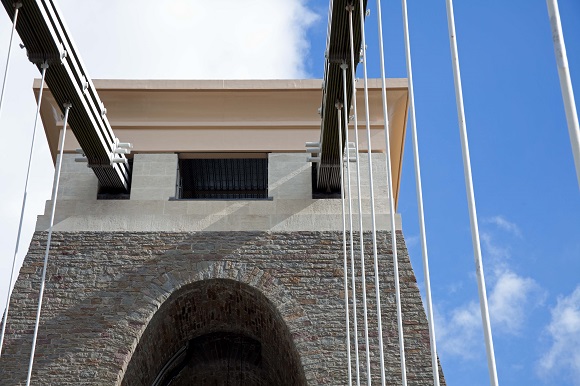 As bridge closures are rare, the team took full advantage of them to carry out a high level bridge inspection. Lots of work took place during the closure which would have been difficult or impossible to carry out at other times.

Specialist high access teams inspected the chains and cleaned away any rust. 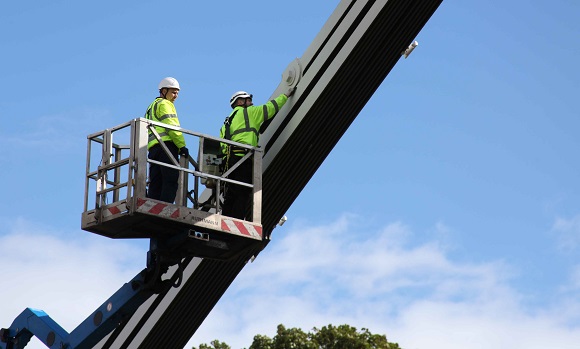 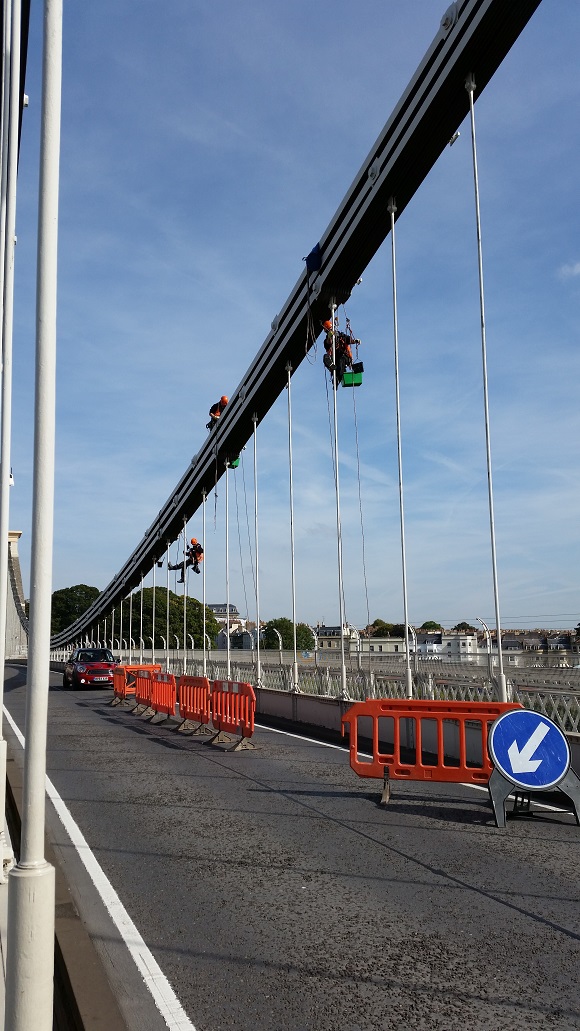 The suction excavation truck from Force One returned to continue clearance of the lower vaulted chambers in the Leigh Woods abutment and enable more thorough inspections of the structure to be carried out. 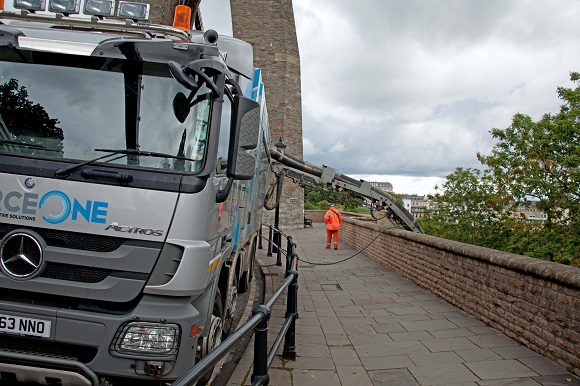 The weighbridge (which sounds an alert when any vehicle over 4 tons approaches the bridge) was inspected and calibrated. 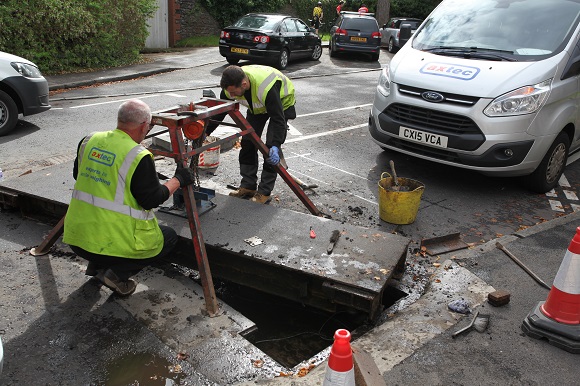 …And because the opportunity was available, the Future Brunels (a group of aspiring young engineers from schools across Bristol) and students from the University of the West of England both visited the bridge to learn more about the structure and its engineering. 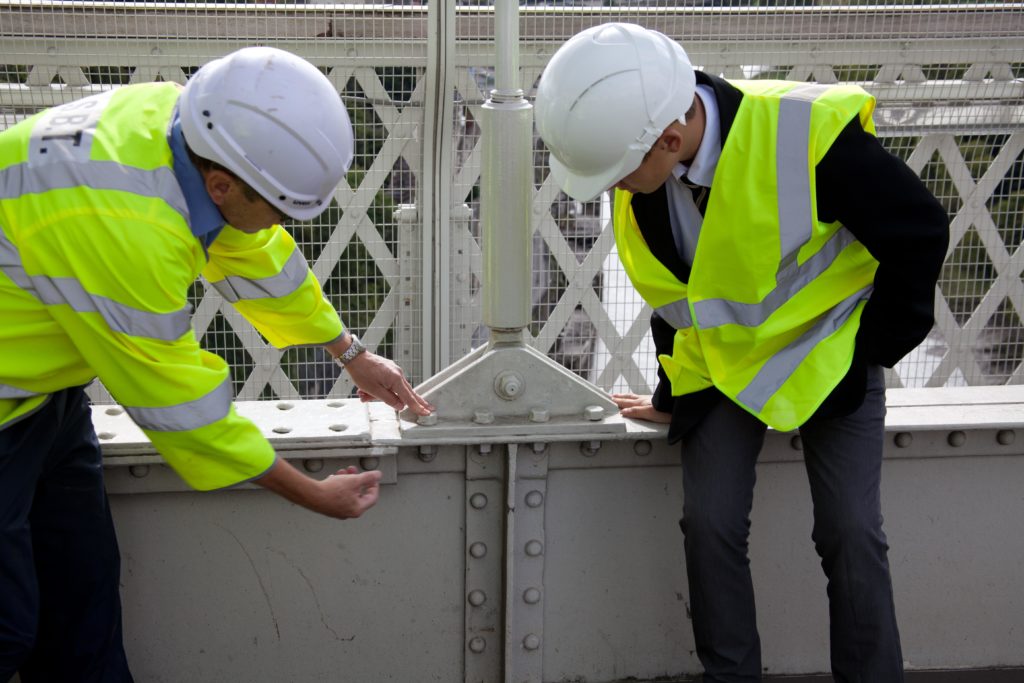 With thanks to Gordon Young, who took many of the images used in this article.

Since the Dowlais Iron Company made the iron that was used to forge the original chains, their importance to the Clifton Suspension Bridge was significant.…