Celebrating a Chain Works and a Chain Bridge 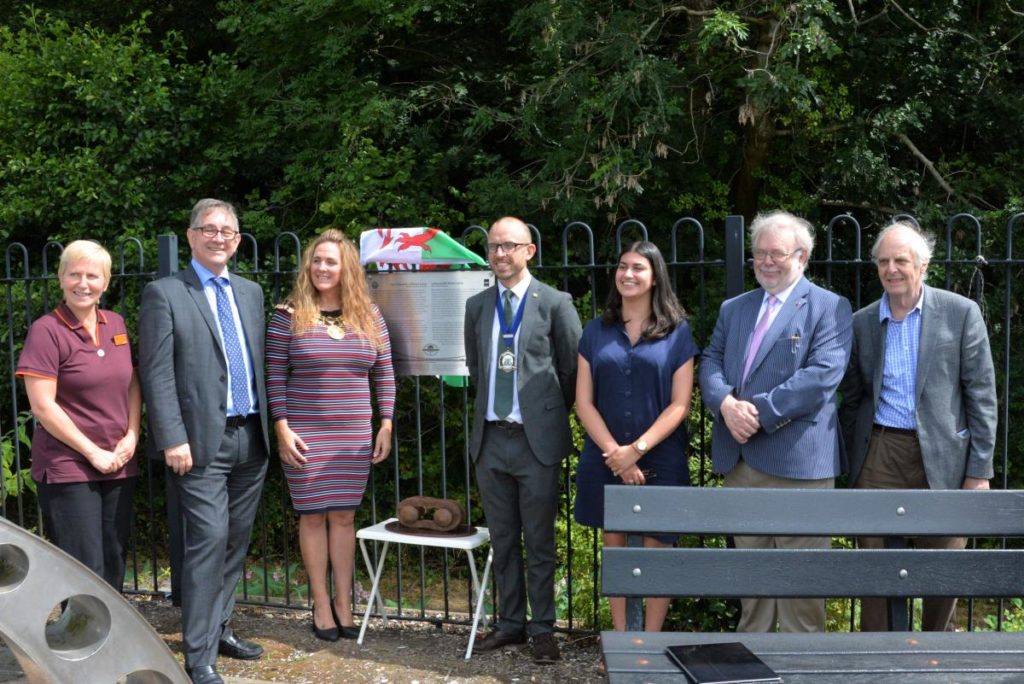 The Friends of the Union Chain Bridge also unveiled a plaque on the 26th July 2019, to commemorate the start of work at Horncliffe near Berwick-upon-Tweed where the bridge crosses from England over the River Tweed to Scotland – England and Scotland united by Welsh iron.

This will be followed shortly by the bicentenary of the laying of the foundation stone of another famous bridge – Telford’s Menai Suspension Bridge on 10th August 2019 by the Menai Bridge Community Heritage Trust. Incidentally, the suspension bridge chains here were not supplied by Brown Lenox but by Telford’s favourite contractor; William (Merlin) Hazeldine.

Brown Lenox was a multi-stranded business covering the development of iron chain cables, the early suspension bridge and more, and played an important role in the industrial history of South Wales and beyond. At Pontypridd Brown Lenox began operations in 1818 following the lease by Captain Samuel Brown (1774–1851) of the site the previous year. By November 1817 he had taken possession of the site and following adaptations and building work to an existing nail factory on the site, the Newbridge Chainworks opened – sometime in 1818.

Brown’s first purpose-built chainworks was established at Millwall on the Thames and although already established as Samuel Brown & Co., the company name soon changed to reflect the input made by his cousin Samuel Lenox. Led by Samuel Brown and his Welsh-born works manager and smith, Philip Thomas, Newbridge manufactured iron chains for the anchoring, mooring and as an experiment, the rigging of ships. The chainworks produced the chain cable for every Royal Navy ship from the 1820s to the First World War and many merchant and passenger ships such as Brunel’s Great Eastern steamship through to the Cunarder QEII. The latter marking the last chain cable order for Pontypridd in 1969.

Newbridge was also being the source of suspension chains for Brown’s chainbridges, Brown being the first to erect iron suspension bridges for vehicular traffic in this country and the Newbridge works produced the majority of chainwork for Brown’s suspension bridges. All chainmaking came to an end in 1969 with a change of ownership and new products. The works gave skilled employment to many in Pontypridd and the locality, part of the site was sold off in 1987 and the last part of the works closed in 1999 and is now occupied today by Sainsbury’s supermarket.

The chair of ICE Wales Cymru; Matthew Jones, was supported by the Pontypridd Town Mayor; Loretta Thompson, and local Welsh Assembly member, Mick Antoniw. Descendants of the Lenox family, in the shape of Jeremy Lenox, and a famous Victorian engineer; Charles Blacker Vignoles, represented by John Vignoles, were also present on the day.

In 1971 the Institution of Civil Engineers established the Panel for Historical Engineering Works to record our historical engineering heritage and raise awareness of the engineers of the past and their work. One of the ways this is done is to place plaques at locations where the public can be made more aware of the history around them. In the past thirteen years ICE Wales Cymru has placed or supported 28 plaques and information panels throughout Wales – marking important historical engineering sites and commemorating famous engineers such as Trevithick, Brunel and Telford.